The Virtual Paintout is a blog which invites artists to virtually visit a selected location each month by way of Google Street View.  Using images found while "visiting" the location as reference artists "walk" around the streets as if they were actually participating in a real life paintout, then submit work to be displayed on the blog site.

The location for August was Detroit, Michigan.  It was quite an eye-opening adventure to tour this city, known as the world's traditional automotive center and recently in the news for its economic decline, unemployment and declaration of bankruptcy.

Downtown Detroit was full of shiny highrises sporting names like Chrysler, General Motors and Riverfront Condominiums.  The river front area itself was inviting as was Midtown and New Center. 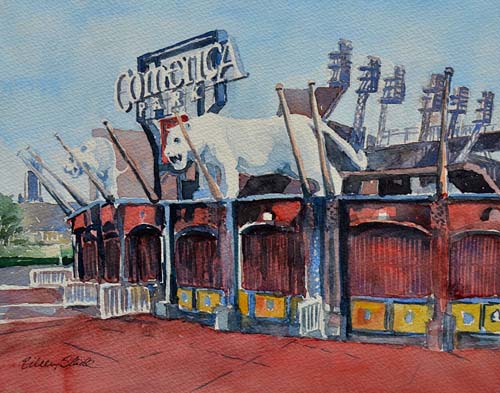 I chose ComericA Park as one of the locations to paint and submited an 8x10 watercolor.  It is the home of the Detroit Tigers.  Another downtown stadium, Ford Field, is home for the Detroit Lions. 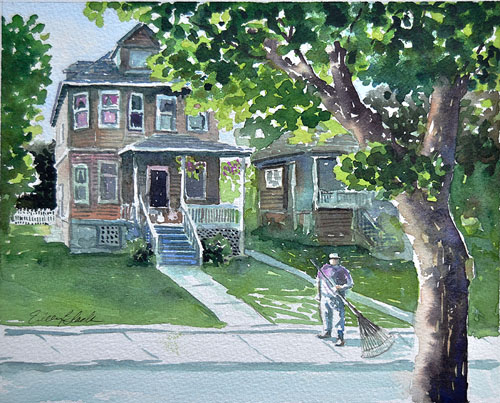 Later I went up and down a few streets in the residential area north of downtown and found a rustic little house for my second submission.

I then took Google Street View over to the area around the Michigan Central Railroad Station.  It wasn't a place I would visit on purpose.

The neighborhoods were in sad shape and the huge station is abandoned and surrounded by razor wire fence and trash.  The windows are broken and it looks ready for demolition.  According to Wikipedia it was renovated and opened in 1978 and then sold six years later.  The last Amtrak train pulled away from the station January 6, 1988.

I considered using it as a subject for the paintout but it was just so gray and disappointing. 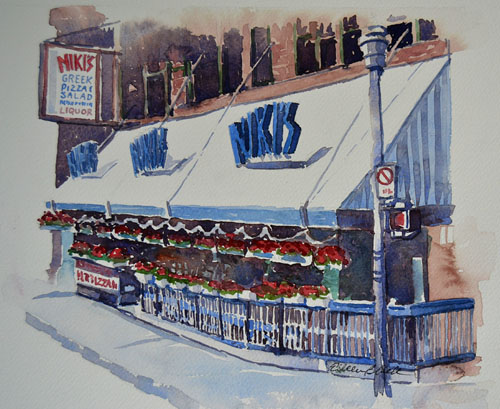 So I went back downtown and painted a picture of Niki's Pizza with its bright colors and baskets of flowers.  Unfortunately I was busy and unorganized the last few days of August and didn't get my little pizza shop painting submitted to The Virtual Paintout.

September's Virtual Paintout Site is the Isle of Wight.  I have to confess I had to look it up to find out it is nicknamed "England in Miniature" and is just off the coast of southern England in the English Channel.  At first glance it looks to be very scenic with plenty of farmland and coastline.  I'm hoping to get time to virtually explore and paint what I find.

Click here for a Google Street View of Michigan Central Rail Station.
Click and drag to change the view and use the arrow symbols to go forward and back.  Use the compass symbol in the upper left to rotate the view.
Posted by Leenie at 9:30 PM

It's always a pleasure to see your wonderful water color pictures.
d(^･ｪ･^)(^･ｪ･^)b
Thank you for sharing.

Your paintings are delightful as always. Too bad the pizza shop didn't get submitted. I love the colours. What a shame about the old railway station. It has such beautiful lines. Perhaps someone will come along and save it.

I liked the Comerica Park the best!

As always, Leenie, awed by your talent. What a cool idea - the virtual paintings. Yeah, I can see why the station wasn't inspiring. So many of these once grand buildings slide into disrepair to eventually be replaced by heartless glass towers.

cheap real estate in Detroit...of course there is no infra structure and no garbage collectors, but you can own a glorious house for pennies! You make it look inviting- they should have you promote beautiful Detroit!

These are interesting. When we in the UK hear of Detroit we imagine it as a completely derelict place. It looks as if it has some good areas.