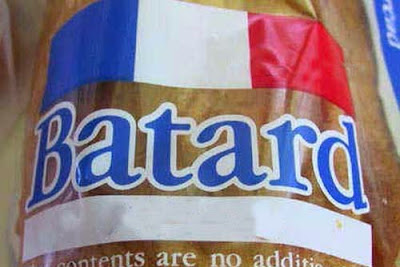 In my continuing pursuit of yummy bread I’ve been going through the book, Local Breads by Daniel Leader. It’s been a fun read and an education on how serious many people take their loaves. 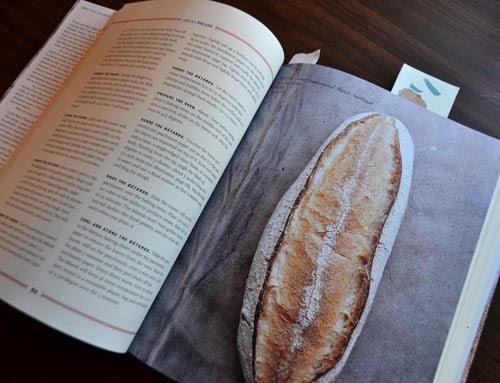 The book had a photo of a beautiful loaf of whole grain bread fatter and wider than a baguette.

My mind went back to a phrase I remembered from my one semester of college Shakespeare, Hamlet to be specific, in which the Great Dane suspects his friends, Rosencrantz and Guildenstern are laying a trap for him and he plans his own preemptive strike.

He said something about the sport of them being hoisted with their own petard; a petard being some kind of bomb and they being damaged by their own explosion.

This led me to check out the actual meaning of the word petard--thus straying ever farther from bread making.
With a little internet research I discovered that the word petard comes from Middle French peter, to break wind; and petard is a modern French word for firecracker.

Which has nothing to do with bread.

Then I found another site which told me some breads  are named after places, but the majority of loaves are named after their shape.  Baguette translates to mean “rod,” and boule means “ball.” 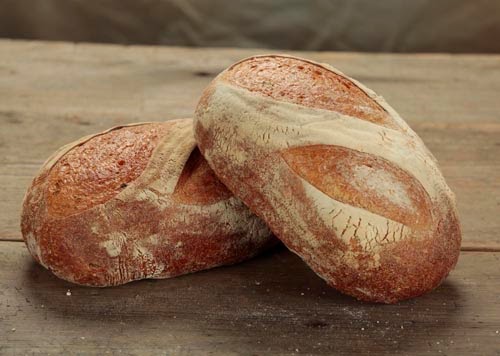 Batard can mean either bastard or hybrid as its shape is a cross between the baguette and the boule. Another reference said that batard in bread circles refers to an inferior baguette, half the length and much wider.  But although bread from a batard does not have the maximum crust of the classic baguette, its fat shape and doughy middle makes it ideal for sandwiches.

I guess I had farted around long enough and decided to try my luck at making a batard or two myself. 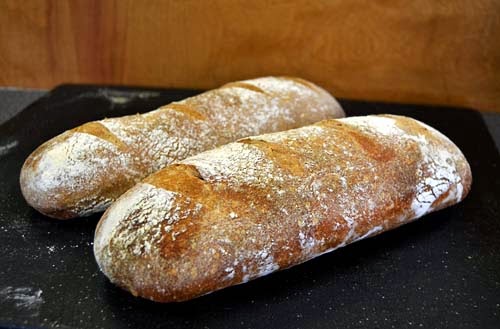 I tried the recipe for whole wheat and rye sour dough bread.  It came out not bad. 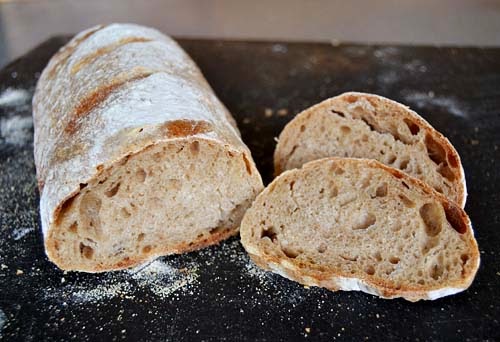 So now I know the difference between a petard and a batard and a baguette and a boule.  But since the guys in my house are not fans of crusty bread I may have to find someone who appreciates this latest creation or buy bigger pants.
Posted by Leenie at 10:34 PM

You could send some to me!!

Congratulations on your little "bastard."

"Farted around long enough" oh yes that says it all I wish I was at your house I would bring large pants with draw strings:) I have been experimenting with Beer Bread the girls at the beerstore love the recipe and now we are on a first name bases I do not drink beer but apparently I do eat it:)My chemistry teacher would be proud actually I emailed him the recipe and his wife is now playing with it. Life is good with bread oh yes need to buy bigger pants:) Hug B

Buy bigger pants...I know I would.

It's difficult to get lost in the dictionary any more. If you don't know how to spell your word, google will boost you along. No more running your finger down several pages and stopping at good other word.

You are so silly! Your 'bastard' loaves turned out beautifully and look like they'd make perfect toast with real butter.

I could think of a hundred things to put on your delicious batard bread...geez this comment is starting to make me sound like a pervert... I guess you know when you are getting older is when food pictures excites you more then a picture of burt reynolds or george clooney laying naked on a bear rug...

You are really getting to be an outstanding baker of breads!!

Leenie! Your bread looks fabulous ! I am carb craving at the moment- winter, coldness, Mr. Man being diabetic so no bread in the house...I want to lick the monitor- your bread with chicken soup, oh YUM!!!Well done, you! and thanks for all the info!

Oh I appreciate it!! I'll taste test, those look amazing.

And I loved the play on words.

I love how you look up one thing and find yourself in a whole other place. I learned something new today, thanks to you, Leenie. I'd never heard of a batard before. But seeing yours, I've got some butter at the ready! :)

Oooh - pick me, pick me!!! Even if it is just so we can say that we smashed that batard!

Oooo...pick me! That looks like about 6 miles extra to me! Worth it!