Two or three years ago Beavis got an X-Box with the Kinect feature. The games respond to players as they move, without the need for controllers.  Soon the whole family was running and jumping in place, bowling without a ball and dancing like a bunch of weirdoes while avatars on the screen reproduce the actions.  Watching the players was even more fun than participating.

Then there was the night we had extra kids in the basement and they were going through a decathlon.  The whole event came to a halt during the javelin throw. During her toss, one granddaughter’s hand clipped the light fixture on the ceiling and it came crashing to the floor.  Fortunately no one was hurt although the games were brought to a standstill while the glass was cleaned up.

The reason this is important is because we decided to just remove the ceiling fixture instead of replacing it since this wasn’t the first time it had been damaged by too much energy.

Soon there was a hole in the ceiling and then plaster and paint, but the paint didn’t match. 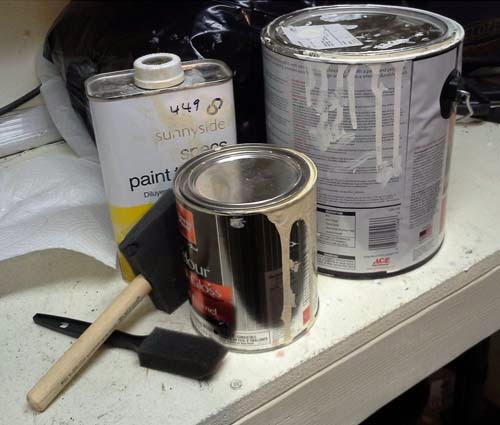 The reason this is important is because after we painted the window frames in the kitchen there was a lot of left-over paint.

So we went through all the hassle of pulling things off the family room walls, moving furniture, draping drop cloths and so forth.  We found antique food chunks, odd toys, coins, and a bug trap filled to the edges with dead hobo spider carcasses. Yikes! 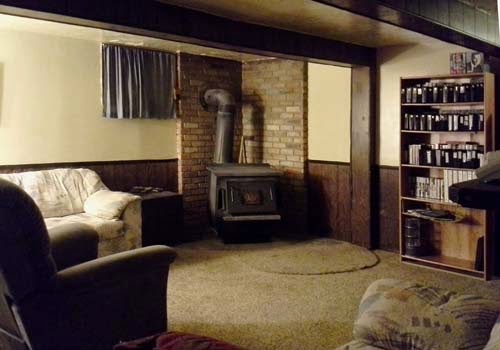 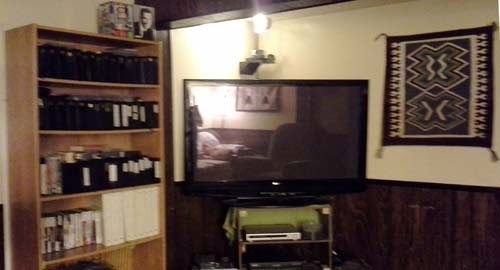 …the smoke from the fireplace was gone from the walls and the man cave was rearranged and  back in business.
Posted by Leenie at 6:50 PM

Oh that is nice I love the man cave. That gaming thing can be quite the thing I have tried the bowling and casting and fishing yup people could get hurt:) fun though. Hug B

That's a nice man cave! Love what a fresh coat of paint will do for a room...now the grand kids can burn off their energy with no worries! :)

Houses, always wanting...the price we pay to stay out of the rain! Glad you got it put back together, just in time for big screen games and manly stuff! If our big screen fell into a portal I would not miss it...at all! well, except for Molly B's Polka party on Saturday night- it's hilarious!

Must get one of those things where you dance along with avatars. Your den looks fabulous, wish dens were built into British homes. House builders have never heard of them here.

Every man should have his own cave...preferably one with locks on the OUTSIDE of the door lol.

How nice it all looks when finished.

I get rid of left over paint in a NY minute. There barely is an aisle left in the basement due to the trash my brother in law cannot bear to dispose of. I'm in a war to keep it below stairs.

lol - oh, yeah, those wild events that take place in the man cave. :)

It looks lovely, Leenie. A perfect place to kick back and relax. Definitely worth the re-painting hassle.

Now you will have to hold a family olympics to celebrate the new look. It looks great!

That is a NICE place. I think Terry needs a place like that but he says the living room works just fine. :)

I'm ready to flop down on the couch and watch everyone else exert themselves.

Looks great! Have you ever read, If You Give a Mouse A Cookie? Your project is very much like that book. :)