THE NIGHT I RODE THE POLAR EXPRESS 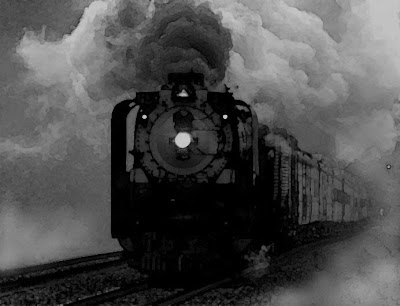 It was early winter in and I was four years old.

The winter had been snowy but the plows were still able to keep a way open for travel to the farms in our community.  Then in late February a storm hit that clogged the roads, followed by an ice storm.  Not even bull dozers could break a trail.

Mom was working alone to maintain the farm, milk our two cows and care for my brother and me because Dad had taken on a winter job in Pocatello, around a hundred miles to the east.  He came home on the Union Pacific train when he could get away on weekends. 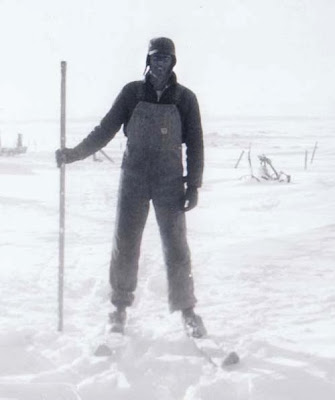 After two weeks of isolation Dad came from the train crossing on skis to get us.

He also brought a toboggan and snowshoes. The next morning I was packed on the toboggan with our luggage.  Mom put on the skis which she had only worn once before.  The snow was so crusty my seven year old brother was able to walk on top of the drifts.

Our journey was shortened to two and a half miles because we were able to travel across fields and pastures with occasional pauses to go over or through the wire fences across our path.

The plan was to meet the east bound passenger trail as it slowed to pick up mail in our small town.  Dad had flagged the train down before since that was his way of getting back and forth to work.

I don’t remember much of the trek except for the part where I had to go potty really bad.  Plus, even though I was snuggled down between our packages on the toboggan I became so cold I must have really set up a protest.

Of course my parents didn’t want us to miss the train since there was no station to wait in and probably not another one coming until the next day.  So we stopped at a neighbor’s farm on the hill above the tracks while Dad and my brother hurried ahead to flag down our ride.  I remember relieving myself in the chamber pot our neighbors kept under their bed.  Then my boots and gloves were removed and my feet and hands were warmed in a basin of water.

I remember the sound of the whistle of the approaching train and the panic to shove on my boots. I remember the rush down the hill, Mom struggling with the skis and the waiting train in the gathering darkness of that late winter day.

I clearly recall being terrified of the titanic black steam engine hissing and panting on the tracks and how Dad helped load our toboggan in the baggage car.

There was a friendly conductor who offered me a chocolate peppermint candy.  I also remember how pleased Mom was that I politely accepted it and how she praised me later as we settled down in our seats in the passenger car knowing I really didn’t care for peppermint.

Now THERE'S a Christmas memory worth passing down. What an adventure. Oh..and the hat is terrific too.

Oh I agree with Delores now that is one of the best memories I have heard of I guess I have to say I am a little jealous, just a little jealous I never did like the chamber pot of a neighbour:) Happy Holidays my dear Leenie to you and your family. More memories you are making for your Grandchildren maybe you can find them one of those chamber pots and peppermint choc is good.... you were a very polite girl. HUGS HUGS B

What a GREAT memory--although i have to admit feeling quite cold while reading about it!!

WOW, for growing up in the 1800's you have aged pretty well!
Idaho in winter , more civil that Wyo, in winter! Hearty folks,all.
Love the photos of little you. I would give you a nickle for that hat!

Leenie, this is inconceivable snow. And, the Real Polar Express.

What a wonderful memory. I'm glad you have some of the old pictures to go with it. That first one of you and your Mom in the snow...wow! How did that old car do in that kind of snow, I wonder. Love it!

Dang! That is some hard-core snow! What a tale to pass on to your family.

I love your polar express childhood memory...and you were a cute little busybee werent you... ;)

I'm so glad you were polite about the candy!
A wonderful memory.

You got to ride on the real Polar Express...lucky, lucky you! This is wonderful Memory, Leenie! We don't have snow like that here anymore...sort of wish we did!

Gaaah! I'm freezing just reading this. Must have more coffee! (We're such wimps in California.)

What a great story, how well you have told it! And a memory to last a lifetime, indeed.
Have a wonderful Christmas.

A wonderful story Leenie. I remember my grandmother lifting up my brother and self on the fence railings at her house to see the puffing billy trains pass by in the distance. At least we only had to hurry from the kitchen to the front yard and not across great expanses of snowy fields!
Have a wonderful Christmas.

What a lovely story, Leenie. The picture of you and your bro' is really sweet!
A happy Christmas to you & yours and a magical 2014. x Anairam

That photo of you and your brother and your special hat is so precious and so beautiful, Leenie! What an amazing tale...and one that will live on for generations to come. :)