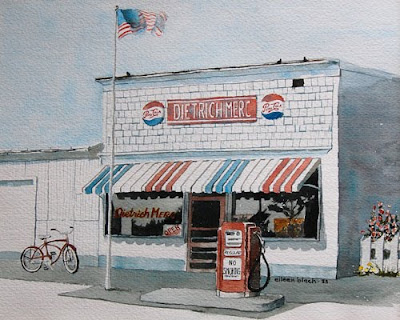 Watercolor of Dietrich Merc painted in 1983 and given as a gift to my parents,
then returned to me in 2008 at their passing.

The screen door announced the entrance of a girl dressed in denim and carrying a stack of school books. She asked for the use of the telephone. Mr. Royce set the phone on the counter and went back to stocking shelves.

“Mom? I’m sorry. Can you come get me? I missed the bus…..I know…I thought I could get a ride home with Danny, but he had to stay for football practice. Okay…okay, ‘bye.”

The store smelled of the oil on the dark wood floor, plus a mixture of soap, leather, cardboard boxes and fresh produce. The girl put some coins by the register and pulled a bottle of Hires root beer from the cooler. A pop and a hiss sounded as she removed the cap. She settled on the box seat by the window and opened a book. The shadow of the store found Buddy in the street. He gathered himself up and trotted to the door when a green Chevrolet sedan stopped in front of the gas pump. He slipped inside as a tired-looking woman entered the store.

“Pick up some cereal and bread while I get a new one of these,” said the woman to the girl as she held up a broken fan belt. Mr. Royce smiled, took the belt and walked to the back of the store. By the time he returned, there was a box of corn flakes and a loaf of Wonder Bread, in the white bag with the red yellow and blue spots, on the counter. A bottle of Heinz ketchup and a tin of bag balm were added to the collection. The woman asked for half of a pound of baloney. Mr. Royce turned on the meat slicer and skillfully cut and weighed the meat and wrapped it in white paper. The new fan belt was rung up with the groceries. The woman and the girl left the store. Buddy settled with a groan into his spot behind the counter.

You write with such great description, I guess it is the artist in you that notices every detail. I could never write like that. You paint a picture with words.

Then I can not even draw a cat. I have no attention to detail...I think that is a symptom of ADD.

Love the picture as well.

This was childhood. Our store was Frank'n'Stans (the Gertz brothers, pronounced as one word. There was a dog, but no gas pump.

Love both the picture and the written picture. I had the honour one summer and school year of working in a real honest to goodness general store.

Your written picture was as beautiful & all-encompassing as your painted one!!

I loved this story, Leenie! And the art work along with it,took me there.

I grew up with my Grandfather's gas station ran by a really nice man, named Jim.

Thanks for step back in time.

I can picture this, just as if I was there seeing it first hand!

This was a real trip down memory lane, Leenie. The painting is stunning. This reminds me so much of an old General Store we used to stop at coming home from the lake on lazy summer weekends growing up. I can still feel the worn boards under my flip-flops.