Correction:  We decided this moose was a female since we couldn't see "daddy parts."  Still, it had bumps on its head like it had shed antlers.  After scanning through Google images we decided daddy moose parts aren't as visible as daddy cattle's.  So our visitor was probably a young bull.

We had a visitor in our neighborhood today. 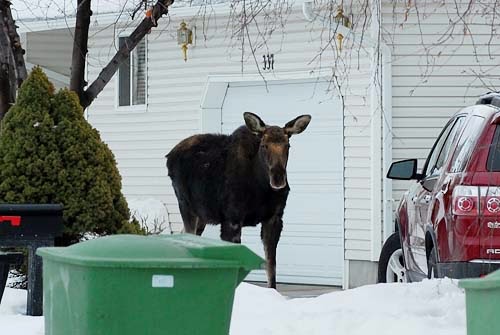 She dropped by to see what was for lunch. 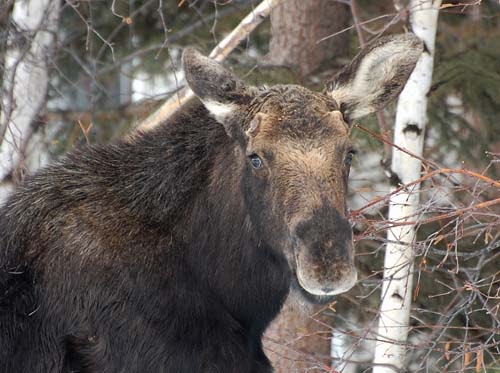 She got a little grumpy when we came out on the doorstep to take photos.
(Good grief there’s the Paparazzi.) 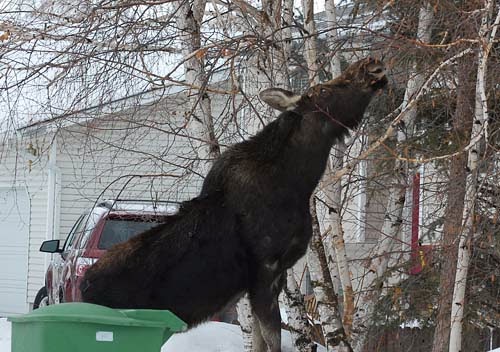 But nothing could keep her from the tender branches on our neighbor’s trees. 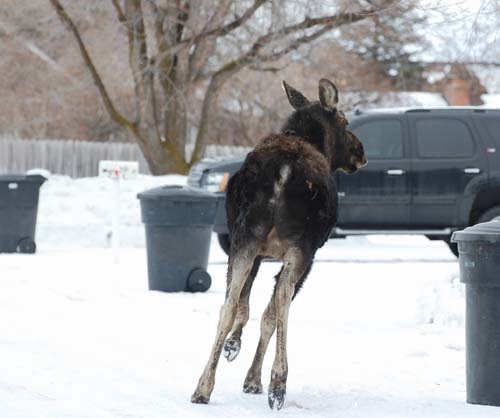 She dined there for quite a while until another neighbor came driving down the street and spooked her. 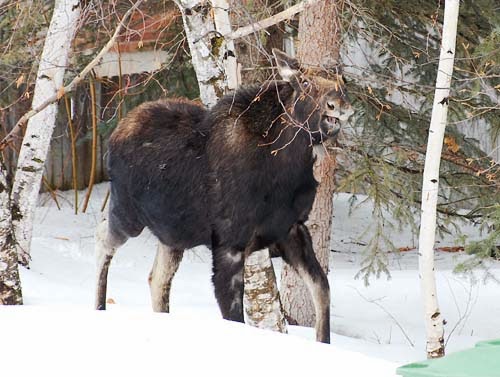 But soon she was back for more. 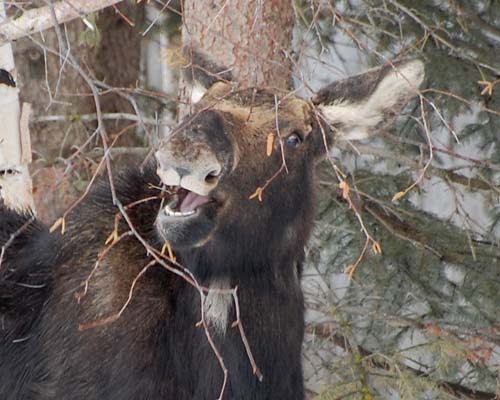 Occasionally moose wander into town, not unlike the opening credits of "Northern Exposure." 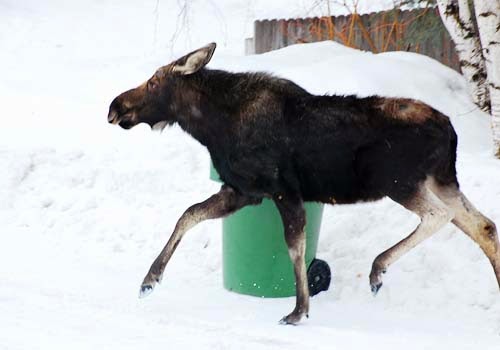 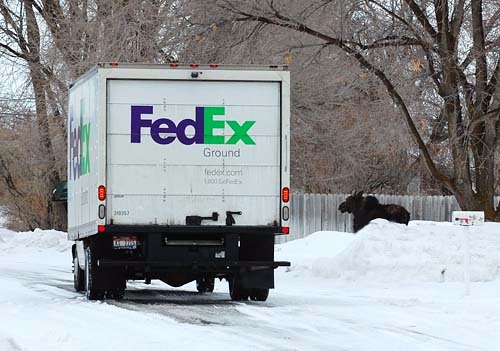 This time by a FedEx truck coming to make a delivery to a house at the end of the street. 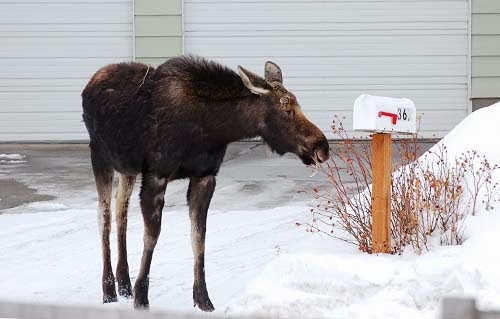 A few minutes later she was back enjoying the rose bushes around the neighbor’s mailbox. 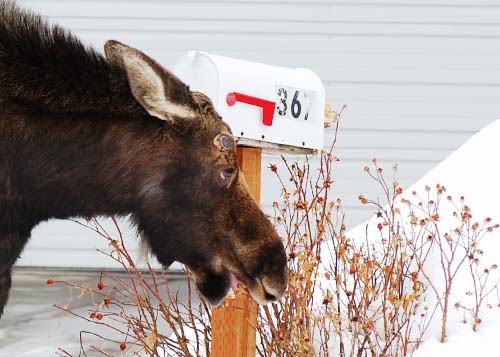 I told DH I would take a snow shovel to her if she came near MY roses. But she wandered off into another yard. 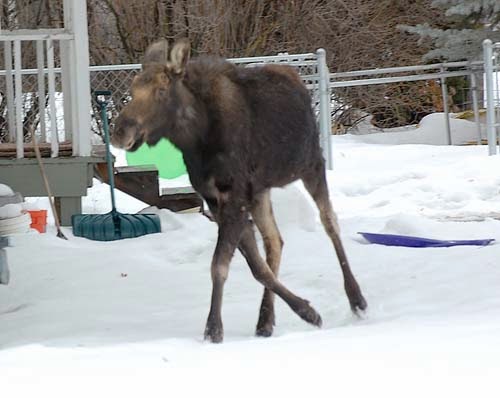 Then a passing car sent her running.  I don’t know how she kept all those long legs organized. 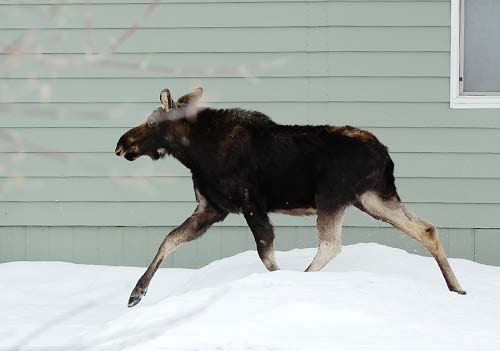 Finally she hustled off into another neighborhood.  We called animal control and they said they’d been notified and were looking for her.  Later we heard a snowmobile and guessed she was being escorted out of town.
Posted by Leenie at 1:46 PM

gosh....a girl can't even pop in to town for dinner out these days...

You don't have deer trouble, you have Moose trouble.

Very cool, but I guess traffic would not be safe for car or moose.

What a sight! You are mighty brave, there with your snow shovel. The deer ate my roses, roots and all one winter, and I slept through it.

Every body's got to eat. I don't think moose have shops to go get cereal and stuff...they should, that would be nice.

The wild life of wildlife!

Great pictures though! esp when its someone elses trees and bushes ;p

The moose in the opening credits of northern exposure actually came from a moose farm LOL and they unloaded it right off the truck (cant see it) and filmed it, then loaded it right back up the trailer back to the farm LOL actually the alaskan town of cicily was filmed in a little logging town in Washington state...not that i have the dvd's or anything...still missing seasons 5 & 6 ...:D

Linda Sue: There WAS a cereal for mooses--

--but I think they ate it all. Back to eating twigs and roses. >8P

Feral: Yeah, movie mooses--not nearly so cool as ours. BTW--seasons 5&6 were mediocre. Not worth collecting.

So I LOVE this I have only seen a real Moose once and that is just not fair. I would let him eat my rose bushes just to see one but then again I don't have roses so it is an easy decision for me:) They must be struggling finding food like our deer here this year with so much snow. Great shots Thank you. Hug B

They have to be one of the funniest looking creatures that God ever created. I still think she's beautiful and I'd be following her around with a camera too. :)
Question---why does she look like she's got places where antler grew/fell off? I thought only bull moose have antlers.

Carla: I was wondering the same thing about those bumps on the head. We were guessing the moose was female because of a lack of visual daddy parts. After doing some more looking through Google images it seems that bull moose don't look like bull cattle from the rear. So, maybe our visitor was a guy.

You know, I LOVED that show Northern Exposure. Poor thing just wants to hang out in the neighborhood and everybody is trying to give her the bums rush!!

Fabulous photos - the most exciting things I get in my garden are birds!!