I was riding my bike past a small pond this morning and stopped to take some photographs of a flock of pelicans making a rest stop on their way to their nesting grounds just north of here. 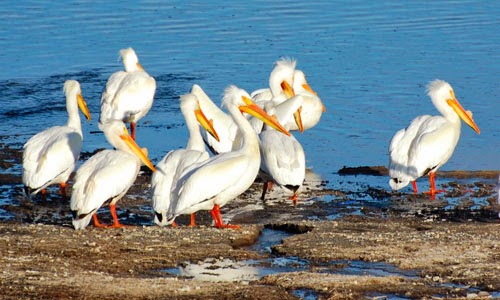 I woke them up from their nap in the sun.   I like how they look like old men with their fluffy top knots and their wrinkled faces.  Their red boots are very stylish.

The following info borrowed from Wikipedia:  The American White Pelican rivals the trumpeter swan as the largest bird native to North America. 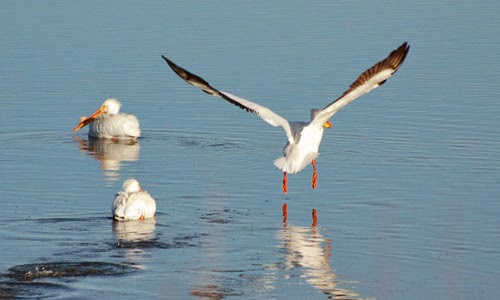 The plumage is almost entirely bright white, except the black primary and secondary flight feathers. 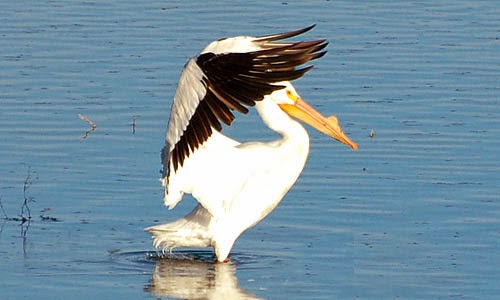 The bill is huge and flat on the top, with a large throat sac below.  In the breeding season, there is a laterally flattened "horn" on the upper bill, located about one-third the bill's length behind the tip. This is the only one of the eight species of pelican to have a bill "horn". The horn is shed after the birds have mated and laid their eggs.

A side note:  My fisherman hubby has no kind feelings for the flocks of pelicans who help themselves to more than the legal limit of the trout in his favorite lakes.
Posted by Leenie at 10:23 PM

Ha ha...they do look like little old men! :) I'm sure your husband and his fishing friends don't like them at all!

They do look like they just woke up and are stretching and farting.

So exotic! All we have around here are crows. Not even ravens. Common crows. If I was a photographing woman, I could show you a murder.

Crows may be common but they're wild and crazy like people who live in the backroads. The ones who think it's funny to gather in a tree and scream bloody murder at six a.m. might be getting up close and personal to their own violent death.

Yes they do look like old men-with big noses! They are such a strange bird. There is a piece of film here from the seventies or eighties I think of one in St James' park in London eating a pigeon. Horrible! Much nicer to see them in the wild competing for fish with humans!