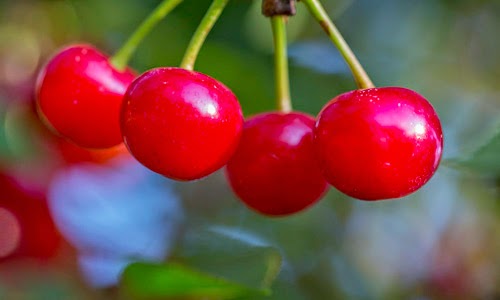 One bonus that came with our house when we moved in decades ago was a small pie cherry tree in the back yard.  DH puts cherry pie on the very top of his list of favorite desserts.  And even though it was December when we unpacked, we already had plans for making pie with our very own cherries.

When spring turned into summer we discovered we weren’t the only ones with dreams of cherries. 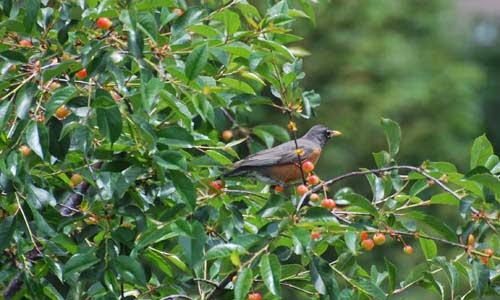 Long before they changed from pink to red we had robins helping themselves to all the cherries they could choke down.

Our first defense was hanging shiny, flashy things like can lids from the branches.  The robins used them to preen and check their beaks for smudges and smears. 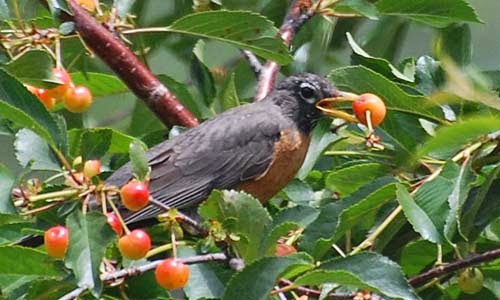 We put a radio in the tree turned to a rock station and added balloons for extra effect.  The birds danced and partied while they feasted. 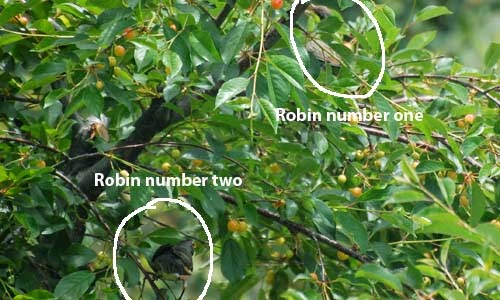 We put a big plastic owl in the tree.  It might as well have been invisible.  Finally I took some old sheer curtains and made a net. We covered the tree so it looked like we had the worst infestation of tent caterpillars in the county but we harvested enough cherries for a pie.

The net worked for a couple of years until the tree got too big.  So even though we were short on spending money we bought a tree net. 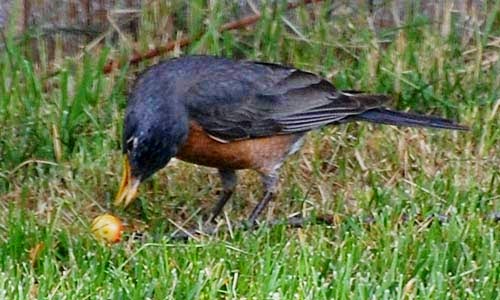 It looked better but we had to cinch it tight around the tree because the robins were determined little critters and not to be discouraged.

One morning we awoke to hysterical screaming coming from the tree.  Not only had a robin found his way through the net… 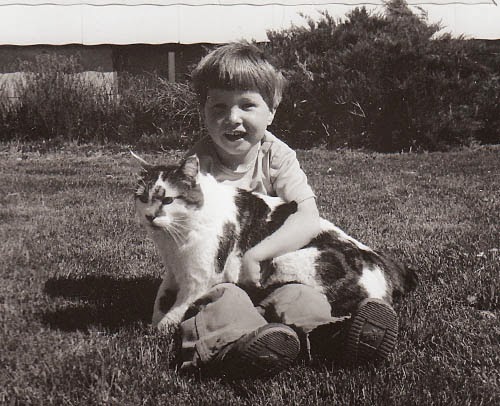 … but so had our big bob-tailed cat.  The cat had gray feathers in his mouth and was going for the rest of the bird.  To restore peace to the neighborhood we hurried out, still in our pajamas, and opened the net enough to let out the cat and finally, the hysterical robin.  Of course that didn’t keep the robins from helping themselves to everything they could pull through the net on the top of the tree. 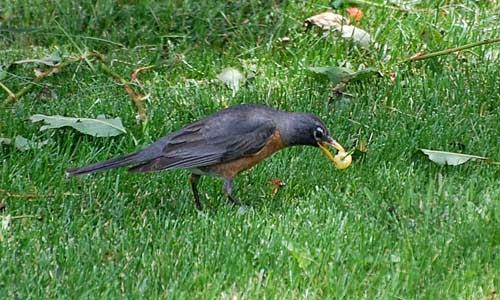 Finally the tree got so big that buying netting was costing us more than purchasing cherries at a fruit stand.

One year our sons asked permission to take their BB guns and use the robins for target practice.  We knew the boys were pretty good shots because all their ninja turtles and a couple of old Barbie dolls had already been assassinated by their firing squad.  So we made them promise to all kinds of safety measures and let them go.  They killed dozens of robins and dumped their poor carcasses in the trash which stunk like a gut wagon in the warm summer weather. 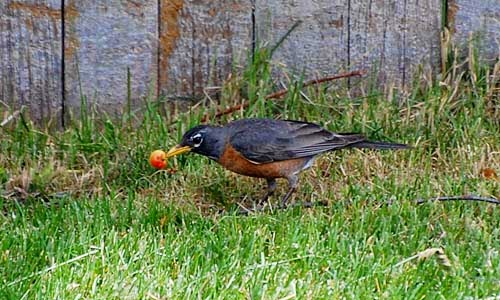 We did have a tree full of cherries at the end of the battle but the neighbors weren’t happy for a lot of reasons.  And the next summer we had even more robins to deal with.  In fact our tree seemed to be the only one for blocks that was being poached. 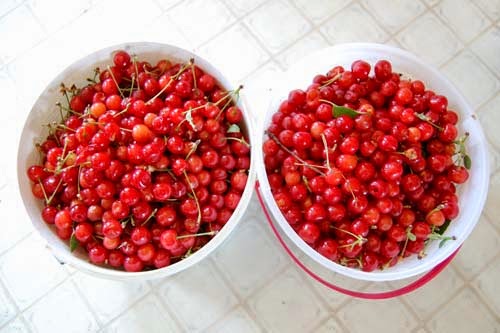 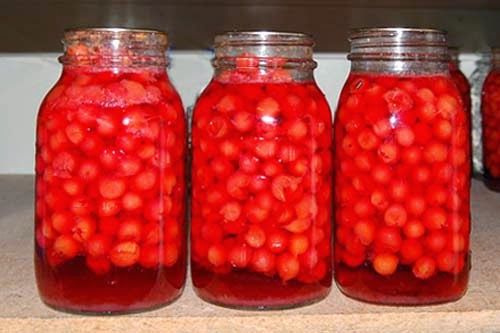 … and put them in jars, and how much our doctors have advised us against raising our blood sugar.  But we still look out our windows and think, “Ooo, wait 'till I get you. You wotten wobins.”
Posted by Leenie at 10:36 PM

It's the same thing with tomatoes..they are pecked to ribbons.

I really can't imagine that battle. It must be so hard to watch the robins eat all the tasty berries. Worse to have them poop cherry pits on your cars. :(
I guess you're right in giving up the battle, though.

Ranchers from the old Italian families in the foothills near here shoot robins and cook them with polenta. I've never tasted that. Personally, I'd rather have robins than cherries. I have a mulberry tree that the robins and jays fight over. They can eat all they want, mulberries are tasteless and messy.

We have had about two cherries from our tree...... in our case it's the sparrows that eat them!

It's cherry season here...I have no idea how they keep the birds out of the orchards! I guess there are just that many trees that it's not even a treat anymore for the rascals!

Hari OM
I LOVE cherries. I am all for sharing though...

Nice to meet you Leenie. I'll be back!!! YAM xx

Along the canal bank...protecting our yard from the canal side is my semi-sweet cherry trees...I have the same problem as you. Oh, and don't plant more thinking they will leave you some....every Robin in a 50 mile radius will find it's way to your small orchard. They also like mulberries...so far I never have any for pies.

Hahaha - those robins just won't let anything get them down! Says something about the tenacity of nature. In the end it is better to stand down from some battles!

Leenie, where are you? Is everything okay?