After taking on Utah's Soldier Summit a.k.a. U.S. 6, "one of the most dangerous highways in America" (where one of D.H.'s nephews lost his life when his fuel tanker truck burst into flames)* we thought the worst mountain driving was behind us. Funny thing is when a traveler crosses the continental divide on a road trip it pretty much has to be crossed again on the return. Due to my navigator taking a nap on our exit out of New Mexico we ended up on the east side of Wolf Creek Pass with a whole lot of the San Juan Mountains in the way. 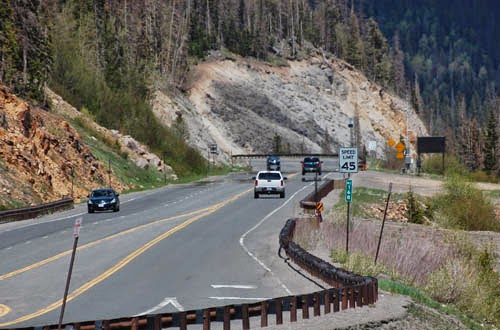 If you're old enough to have survived the seventies you may remember a trucker song by C.W. McCall about Wolf Creek Pass. The highway has since been expanded from a two lane to a multi-lane divided highway but it's still a seven percent grade on both sides of the " thirty seven miles of hell." 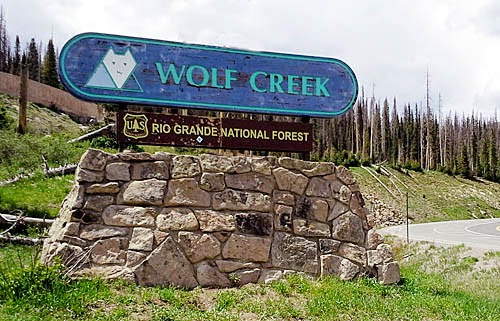 We weren't in a truck but my little Subaru Impreza with stick shift ate those inclines for lunch. Still, it was a bit hairy-scary on the way up AND on the way down.

My ain't this purdy up here! 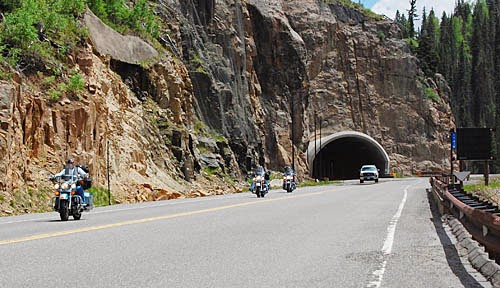 Right in the middle of the whole darn show was a real nice tunnel, now wouldn't you know? 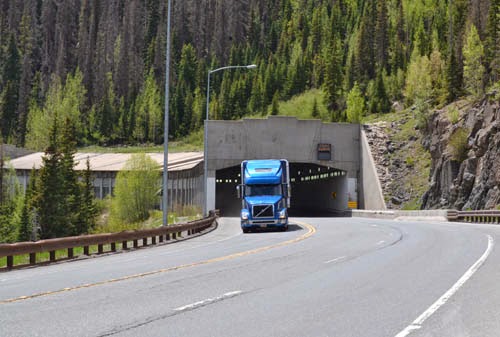 Coming down the other side was a snow shed we shot through like eggs through a hen. 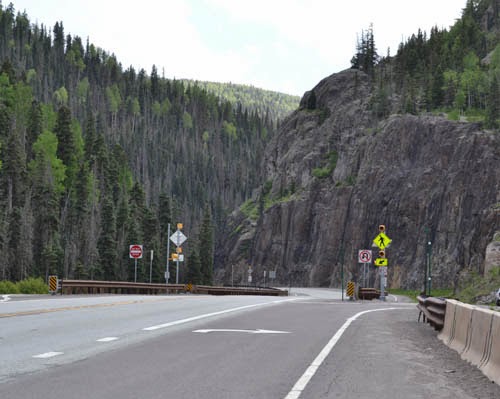 We went down and around and down 'til we run outta ground at the edge of town. 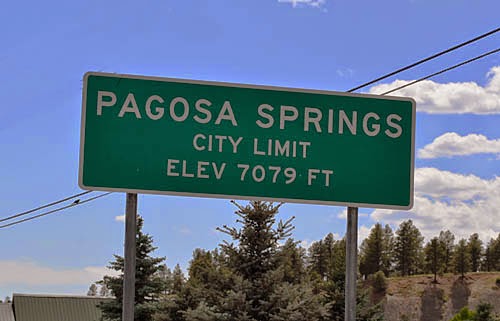 Had to stop and look for a restroom in downtown Pagosa Springs.

*The carnage on U.S. 6 earned it the dubious distinction of being one of the most dangerous highways in America. At least, that's what Reader's Digest and the BBC declared 10 years ago. Since 1996, more than 150 people have died in more than 500 serious accidents on that central Utah portion of the road.
Posted by Leenie at 10:27 PM

I've been on similar roads, and they scare the bejesus outta me.

Yep! Welcome to our neck of the mountains. If you want to go anywhere from our farm...you must travel over the Rocky Mountains and the Continental Divide!

My bucket grows more and more itchy. I haven't been this was since the eighties, when that was a two lane road. I did it in a standard shift, too, pulling a camper. I need to go back.

Might be a bit scary, but it sure is gorgeous country! Thanks for showing us yet another place we'd like to see in person! :)

Oh, dear. I would have to get out at that tunnel, and climb and rappel over that mountain, and meet you on the other side. I don't like confinement. Maybe a good tranquilizer would do.

Beautiful and frightening -- not necessarily what I'm looking for in a road!