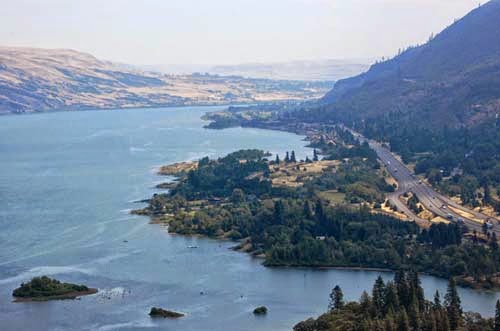 The Columbia River Gorge is a main artery through the Pacific Northwest.  I’ve had several occasions to travel that way both by automobile and train.  The people I’ve gone with have always been in a hurry to reach their destination.  A couple of times I went with my dad and others on fishing trips to the coast.  Dad would work on the farm until the last minute so he could get away, and then the drive would be a frenzied marathon to make the scheduled boat ride. 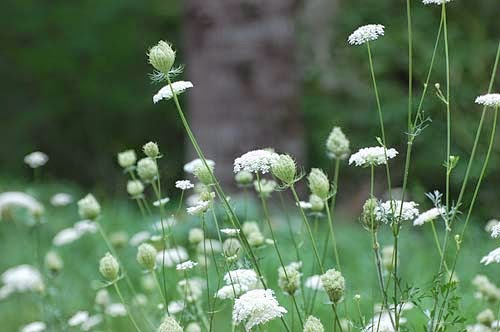 There were trips back and forth when DH was in the army and stationed at Fort Lewis on Puget Sound.  For most of those we ended up going down the Columbia River at night or in the winter so there was no stopping.

On other occasions I was with relatives who went that way so often they felt they’d seen the sights and were uninterested in stopping.  They told me about all the beautiful waterfalls and the amazing views of Mount Hood and Mount St. Helens and kept on driving.

So this time I allowed for some time to just be a tourist and do a little sightseeing. 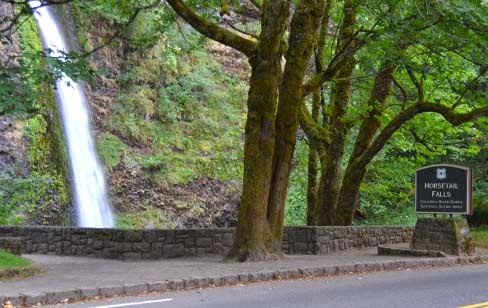 I took exit 35 off Interstate 84 heading west just out of Dodson and caught a section of The Historic Columbia River Highway.

Opened in 1915, Highway 33 was a marvel of engineering at the time and, by providing access to automobiles, opened the Gorge to casual visits.

Along the way are views of five scenic waterfalls cascading over the edge of the steep canyon in a distance of around thirty miles.
At around 600 feet, Multnomah Falls is the tallest waterfall in Oregon and the fourth tallest in the United States. As the largest and most famous waterfall along the historic highway, this is also the state's most visited natural attraction.  When I arrived in the middle of the day the place was so crowded with tourists who’d jumped off I-84 to see the waterfall that I couldn’t find a place to park.  By the time I finally did get a parking place the cloudy skies had turned to a misty rain and thunder rumbled in the distance. 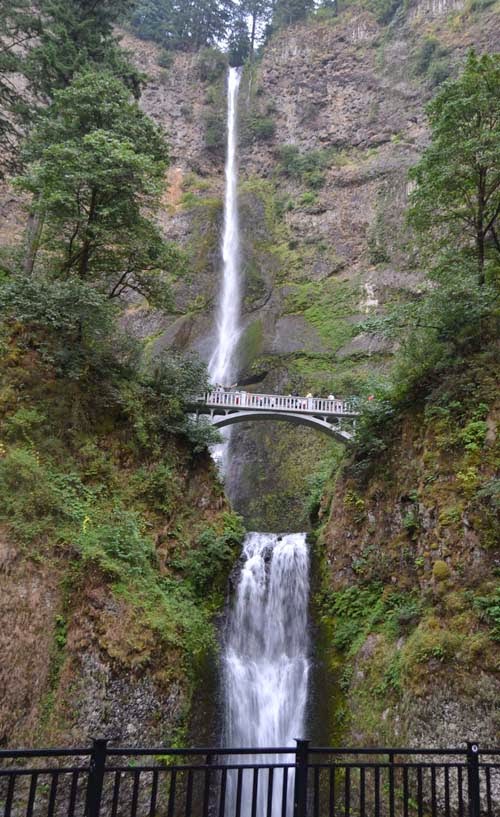 I grabbed my camera and elbowed my way through the other tourists to several spots where I captured my own photos of the falls.  By then the mist had turned to a downpour accompanied by flashes of lightning.

Since I left my car without rain gear I was soon soaked and dripping.  I couldn’t get any wetter so I did what I could to keep my camera dry and hiked up the trail to get a view from the bridge.  It was worth it.

After stopping to visit three of the waterfalls and thinking back to other similar locations, I wondered why people are so drawn to falling water.  My guess is the peaceful feeling we get from the graceful flow of water and the soothing sounds whether they whisper, rush or thunder.  There may be something to the freshness of the air around falling water as well.  Ironically the peace and tranquility are lost in the commotion and clamor of the attracted crowds.
Posted by Leenie at 9:31 PM

Beautiful photos....thanks for getting wet for us.

Crowds seem to ruin nice places, glad your pictures only showed the sights that attracted the crowds.

Negative ions are odorless, tasteless, and invisible molecules that we inhale in abundance in certain environments. Think mountains, waterfalls, and beaches. Once they reach our bloodstream, negative ions are believed to produce biochemical reactions that increase levels of the mood chemical serotonin, helping to alleviate depression, relieve stress, and boost our daytime energy.

Our Veterinarian told me that animals like to be near or seek out running water when they are either dying or just feeling unwell.
Your shots a AMAZING, Leenie!!!

Leenie, the Columbia River literally took my breath away. I've seen a lot, and seeing it, I was humbled.

Stunning photos! Thanks for sharing with us!! I could hear the thunder!

My two favorite things in the world are sunsets & waterfalls!!

May I sigh with a wee bit of jealousy? The many colors of green call to my soul. The water, oh the water! Thanks for taking me along with your photos.<3

I don't know what it is that makes waterfalls so wonderful...but they are! Big or small, they're captivating. I remember visiting Multnomah Falls when I was a student at Ecola Hall, 25 years ago.