Finding socks and gloves along the sidewalk this time of year is not unusual.  Litter of all kinds is being revealed by melting snow.

Still, a playing card huddled in the grass caught my attention and I stopped to check it out. 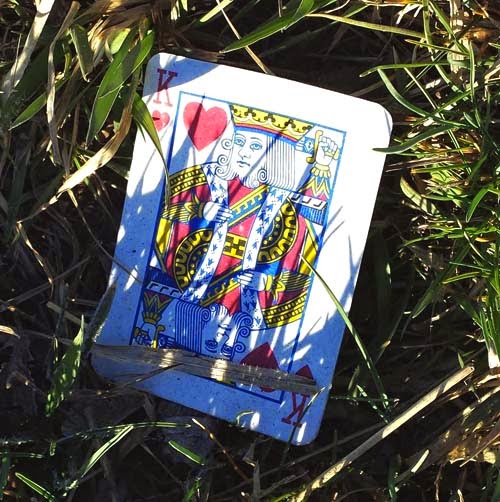 It was the King of Hearts.  Hearts mean love and life; a good omen.  But this card is also known as the Suicide King because he appears to be stabbing himself in the head with his sword.  Not a good omen.

By the time I got home I was really wondering what that was all about.  Knowing I could end up in a muddle of information, I Googled the question anyway.

I was right.  I could have spent all day reading theories and opinions posted on the internet about the origin of the Suicide King.

Most agreed the kings on the deck of cards used today are supposed to represent four specific kings in history.  Diamonds is believed to be rich Caesar, Alexander the Great is symbolize by clubs, and spades is supposed to be King David. Some say the king of hearts is either Charlemagne, the “Father of Europe” who died of a lung infection in 814 or Charles VII of France who died of a combination of illnesses in 1461. 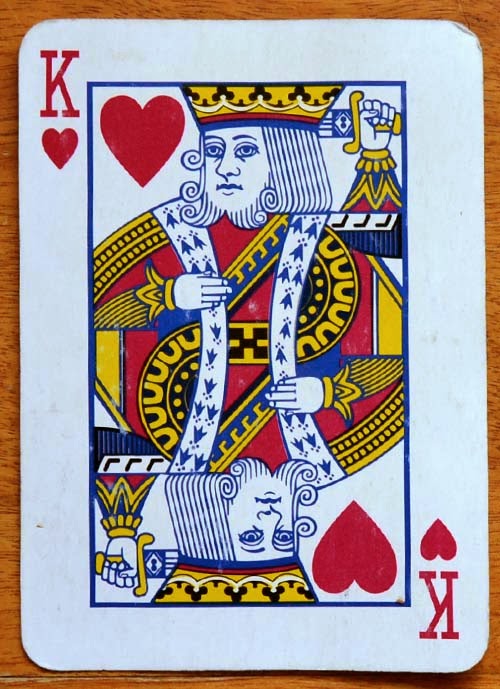 From there the information got pretty confusing about why the King of Hearts is shown apparently stabbing himself in the head.  Some say he was insane and committed suicide.  Some say the hand with the sword doesn’t match his other hand and that he was being murdered.

The version I liked best can be found on the site The World of Playing Cards which basically said card designers originally gave the King of Diamonds and the King of Hearts an axe and the other two kings held swords.  Then the design changed from a full body drawing of the kings to a two-headed reverse image of their upper body.  The king of hearts originally held his axe behind his head but over time the handle of the axe was confused for a sword which evolved to a raised sword and then the tip disappeared making things look like the king was stabbing himself in the ear.

As one who has spent years working in graphic design I can see how this could easily happen.  So often I was expected to take a tiny muddy reproduction of a logo clipped from the Yellow Pages and clean it up to make art ready to be printed full size on the chest of an order of tee shirts.  If I didn’t have another point of reference I could certainly confuse the handle of a sword and the handle of an axe. 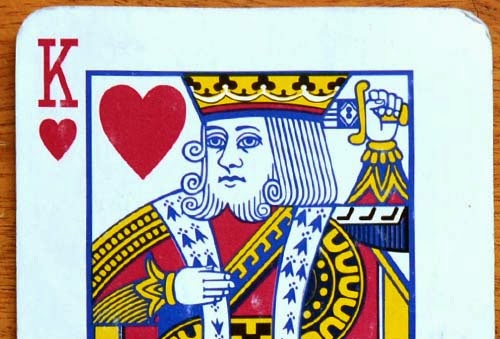 People can read what they want to into the hands and swords and eyes and colors of the King of Hearts.  I’m just thinking artists were dealing with a copy of a copy of a copy when the design was finalized.

Origin of the Suicide King   http://www.wopc.co.uk/cards/suicide-king.html
Posted by Leenie at 5:27 AM

That was very interesting!

I am going with Mr foresterman soon to visit his family. All of them play cards because "milwaukee". So please pray for me as I go through endless rounds of "hand and foot".

Although the info you just gave me here might be used to my advantage- while they are concentrating, I will bring up the aforementioned info and while they reflect on that - ill beat the snot out of them by garnering the most points!!!! Thanks Leenie! xoxo

I have never before even noticed the sword, or the different hands. Now it will be the first thing I see.

I have never before even noticed the sword, or the different hands. Now it will be the first thing I see.

I have to say I never noticed what the king was up to on the card...but now that I look at it....it looks to me like the blade goes behind his head.

well that's interesting, I have never given him much thought except what he may trump and If I have a wife and son for him in my hand, then he can stay...if he stands alone, stabbing himself I will promptly toss him into the pile of other "trouble" cards.

You're like me---can't leave well enough alone. :) Gotta ask Uncle Google to find out "why".

Maybe it's just a rudimentary curling iron to make his hair flip like that.

Val. I love your theory. And it certainly explains that hair style.

i just thought maybe he was (carefully) scratching the back of his head...or stretching...

but honestly...i play cards now and then, and never even noticed the sword!
now, looking at your pics...i don't think the sword hand is the king's. the cuff is very different. must be someone else wielding the sword who wants to take his place in the deck of cards!!

I love unexpected things like that--they make you stop and think...and wonder who was playing outdoor cards and lost one? Where is the rest of the deck? Are cards roaming freely around the neighborhood?

I once found a 2 of clubs while out hiking. Miles from anywhere. Perplexing! I think cards and socks have something going on. :)