It’s August and time for the annual Madison County Fair which takes place just two blocks from our house. 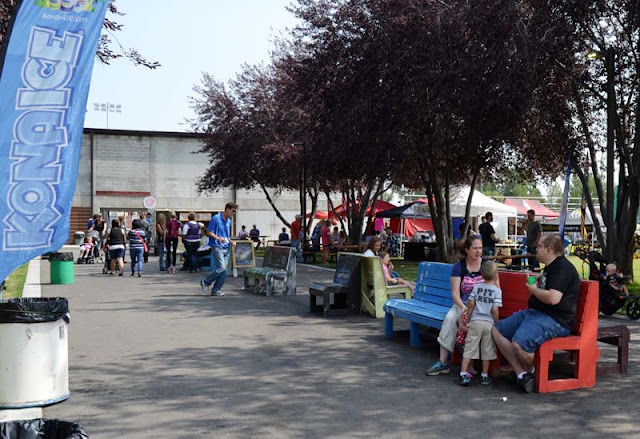 This year the weather was perfect, low 80’s with a light breeze.  We went in the morning while the crowds were still small and the food was fresh. 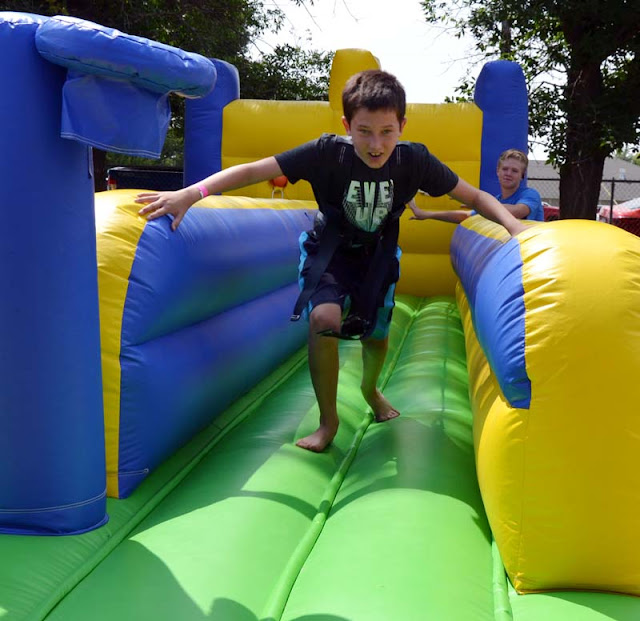 No carnival rides--with safety standards open to interpretation and sketchy operators--this year.  Almost everything was bouncy. 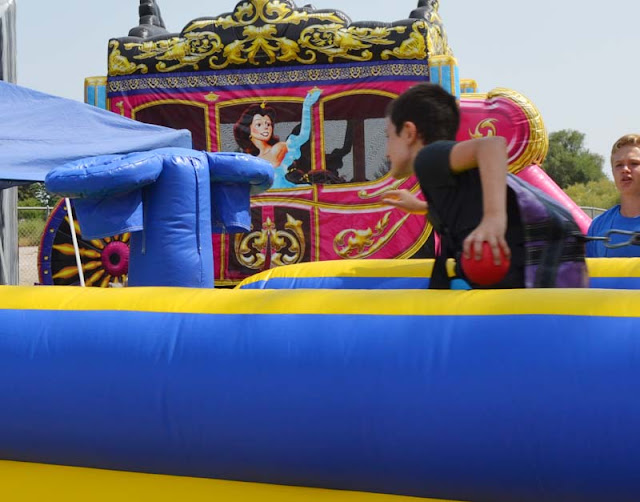 The grandson was in competition with a young lady in the next lane to run against a bungee to slam balls into a hoop. 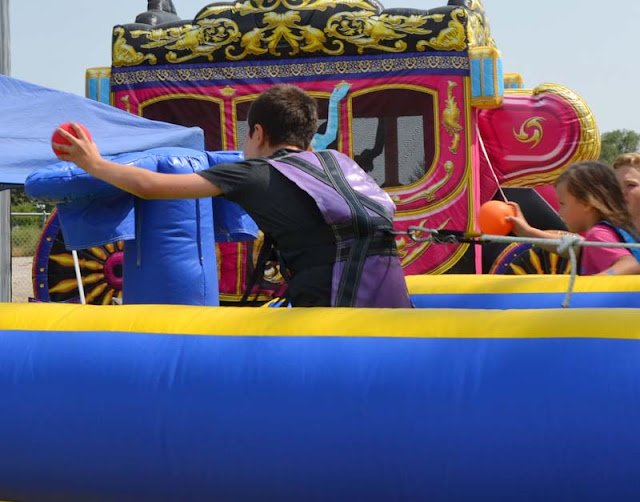 She was a serious challenger! 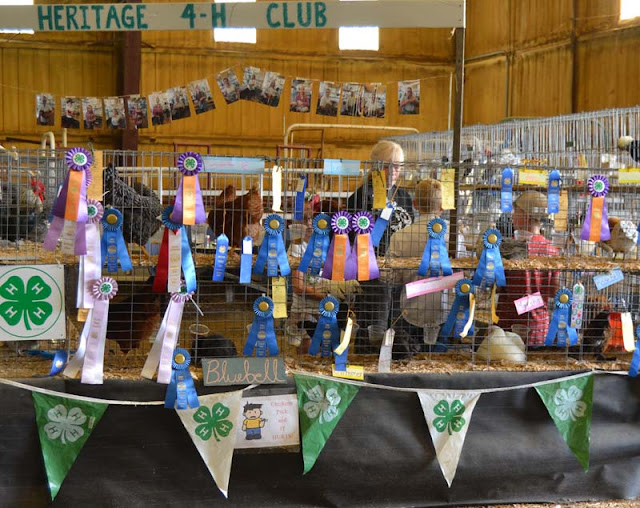 My favorite is always the barns with the 4-H animals. 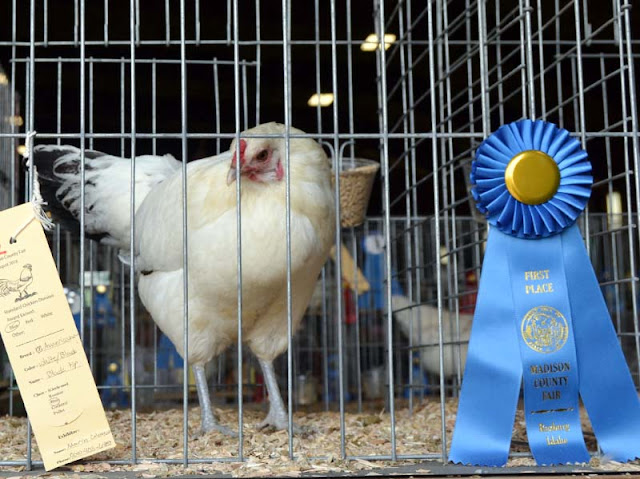 There were cages and cages of champion chickens of every kind. 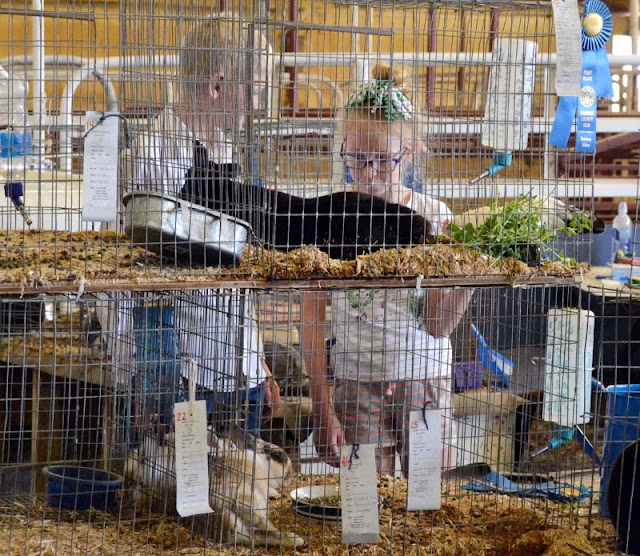 There were bunnies and goats… 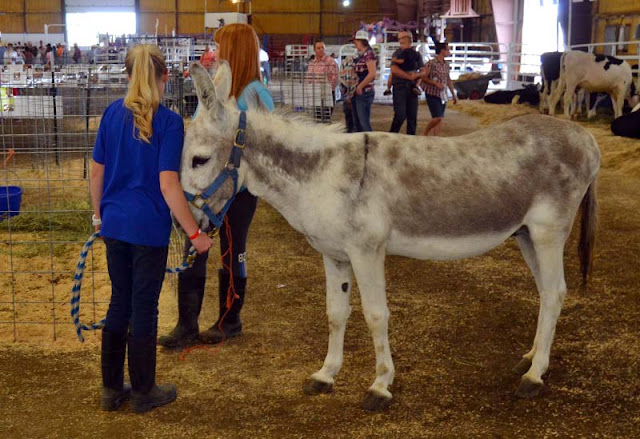 …and ponies and donkeys, all under the watchful care of junior owners. 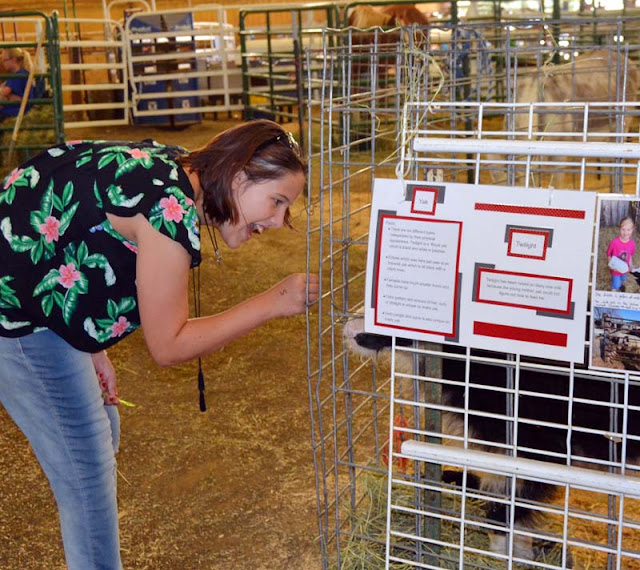 Granddaughter was making friends with a shaggy baby yak. 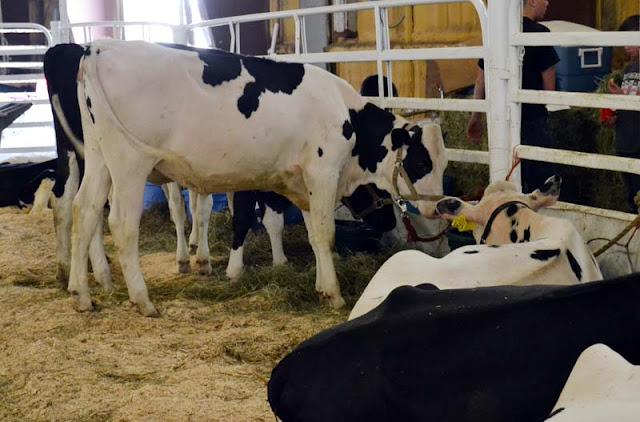 My very favorites are the dairy cows.  I entered prize-winning heifers from my mom and dad’s herd when I was a youngster.  One year our pickup truck was unavailable when it came time to take my girl to town.  So mom and I took the back seat out of our car, covered the floor with spud sacks and loaded the calf in.  She loved putting her nose out the window to sniff the fields of alfalfa and wheat as we drove. 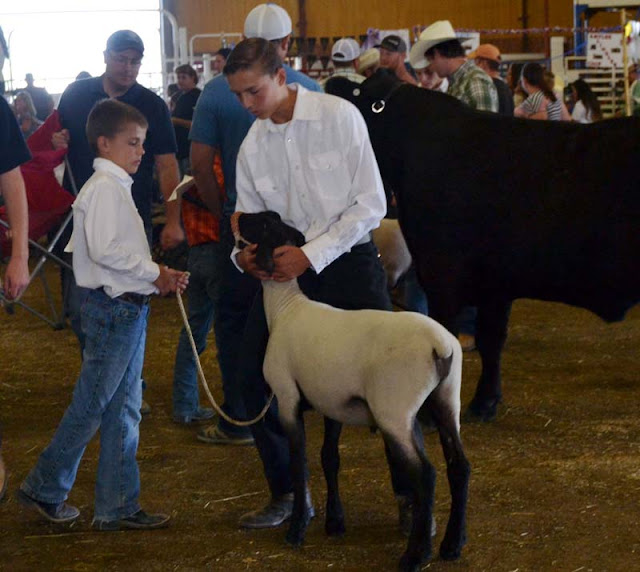 In the small indoor arena an auction was going on to sell the show animals.  After months of work and grooming the young farmers were cashing in.  This sheep went for almost $300. 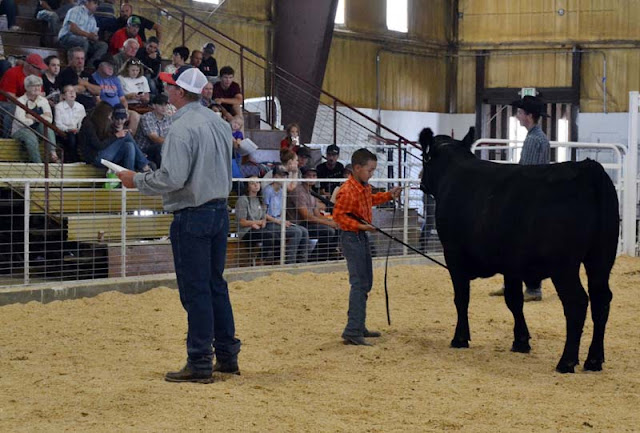 This champion steer brought enough money to pay for a new car.  After his owner subtracts his investment of purchase, supplies, feed and time he may have enough to buy another calf and a new pair of boots. 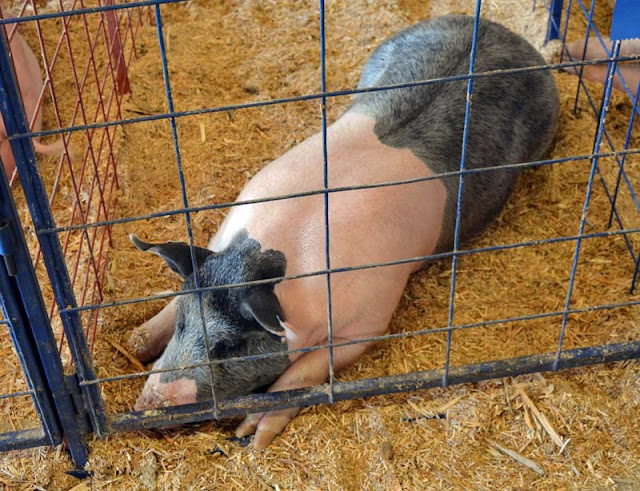 Our next stop was the pig barn. 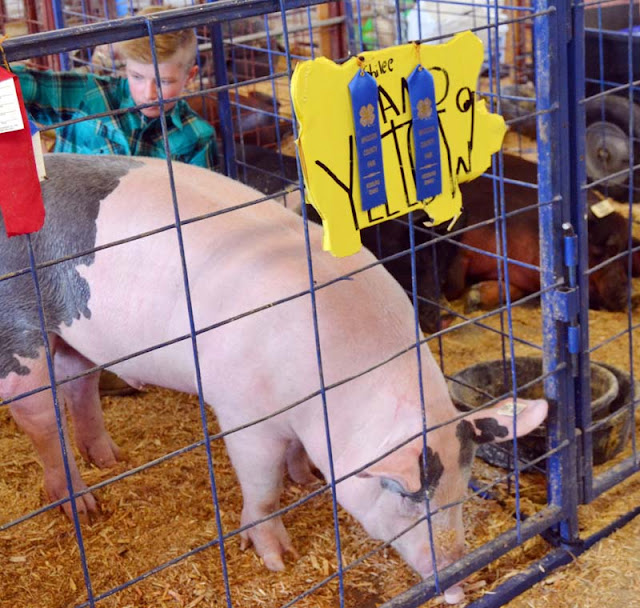 They were also getting groomed for their turn in the auction ring. 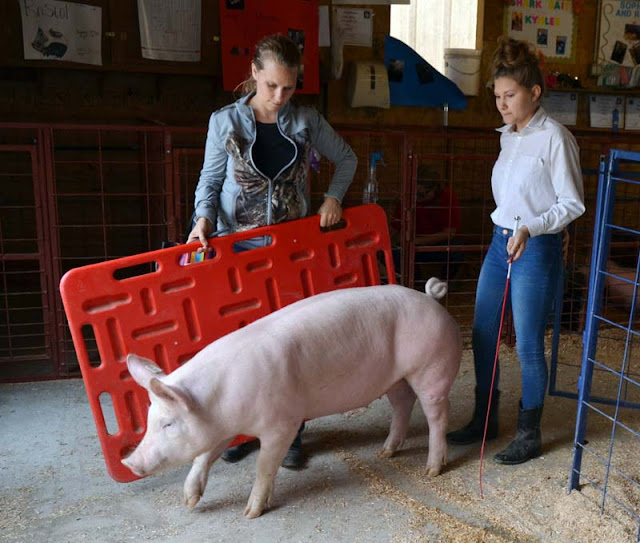 Just don’t say “bacon” or “sausage.”  It’s difficult enough for some of these young people to give up their animals after months of care and concern. 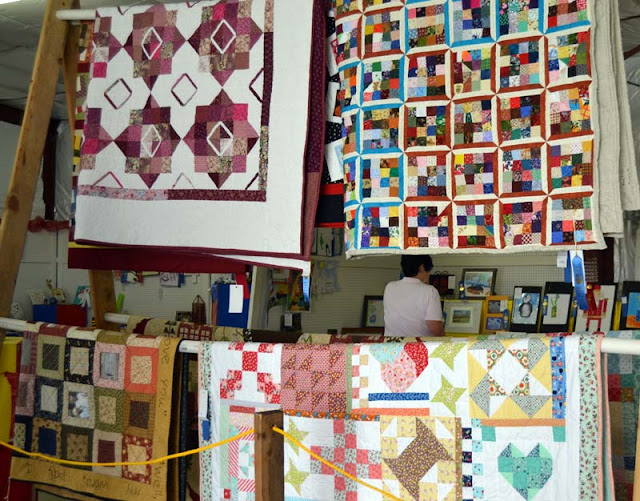 From there we went through the home crafts, 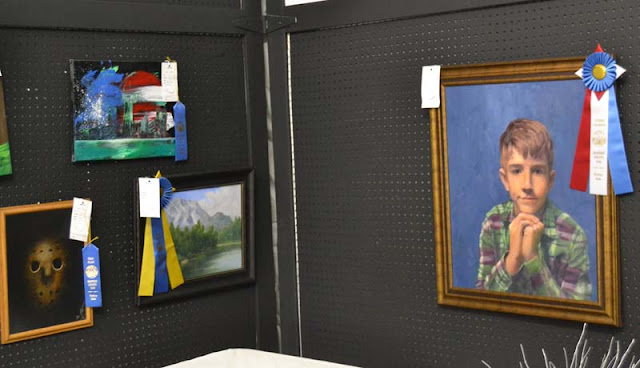 The art and photo entries, 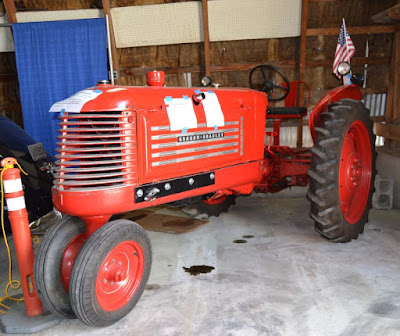 Checked out the antique tractors… 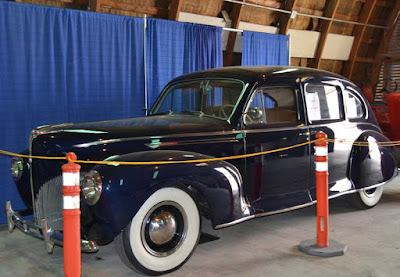 …and the vintage cars. 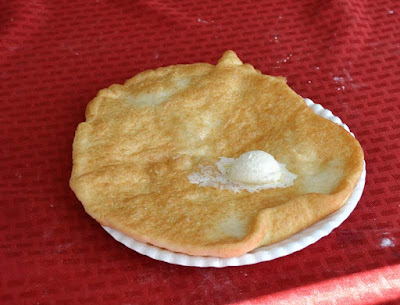 After all that we had to go back to the food booths and get some nourishment.  Nothing like deep fried scones with honey-butter to finish off a visit to the fair.

You're so lucky that the county fair is only two blocks from you!!

yep, looks like the fair. That lamb is so gorgeous!! Hefty price- will make lovely babies!
We do not go to our county fair anymore, it has been ruined by Birchers, Bible bangers, and gun nuts. Not to mention the price to get in and no parking anywhere near. Too bad- I really loved the art barn!

fishducky: Being two blocks away means we don't have to find parking but it also means we can hear every word the announcers make during rodeos and events such as demolition derbys--plus the roar of the car--until the whole event is over -- sometimes until 11 p.m. On the other hand we can watch the fireworks from our porch.

I love fair season! It's coming soon here, too. End of September for the one we participate in. It would have been quite a sight to see that calf poking her head out your car window! :)