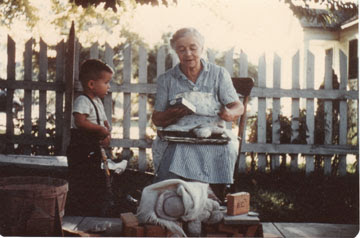 In a bunch of loose photos in my mother's basement I found this picture of my grandmother, Nellie (Hunt) Collings. This is how I remember her. I spent a lot of time at Grandma and Grandpa Colling's house in Jerome, Idaho as a child. They would babysit me while my mother worked at a sewing shop. The child is my cousin, Bruce Collings. In front of Grandma is a stack of wooden blocks. On one of them are the letters, B.C. which were probably initials Grandpa burned into the wood with his magnifying glass for Bruce. You can see a doll wrapped in a blanket and also a bushel basket which was used to hold toys. Grandma was a fun babysitter. She told great stories of her life growing up during the settling of Utah. She had quite the sense of humor as illustrated in the following poem:

I was invited to a party once upon a time.
They told me I could either bake a cake or make a rhyme.
So I decided I had better write a verse.
While my poetry is horrid my cake making is worse.

Nellie was called upon often to provide poetry for community events, but mostly for funerals of the death of dear ones; the majority were departed children.
Posted by Leenie at 6:53 PM

Great Stuff!
Keep it coming, By the way, Im home! No more campfires in the rain for me!!!

mt dad told me that poem once. i like it a lot.

thats kind of depressing but your grandma sounds just as much fun as you. i look forward to meeting her. some time in heaven.