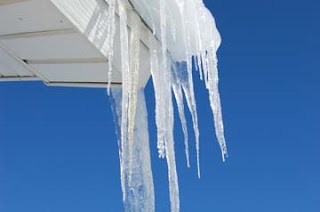 Almost every year at around this time we experience what is called THE ALBERTA CLIPPER. So named because Arctic weather drops down out of the Canadian Province, Alberta, and sends the temperatures below zero (-17C). Sometimes the thermometer readings continue to drop until -40F equals -40C. And things usually stay that way for days and even weeks. School does not close unless it gets down to -20 because the buses won’t run and it is dangerous for anyone to stand around outside in those conditions. According to The Weather Channel, Montana and the Dakotas are getting the icebox weather plus a big snow. New England is recovering from an ice storm that took out the electricity, among other things. Hubby had our snow thrower all primed and ready to go so he was able to move the big ridge of snow left across the driveway by the snow plow last night. Our house is so snug we can’t hear the wind blow thanks to the hours and hours spent in the attic installing insulation last October. We send best wishes to those who have to travel on icy roads and put another log on the fire.
Posted by Leenie at 9:11 AM

Brrrr...baby it's (((cold))) outside!
Good thing I live in central Canada..not as cold here!

I don't like the sound of that cold weather leener, but I do love the beauty of your pictures of the snow. We have snow but it is usually the damp, miserable sort.

I lived there, and I DONT miss THAT! brrrrrrrrrrrrrr. I think I will go get under my electric blankie after that picture! ;)