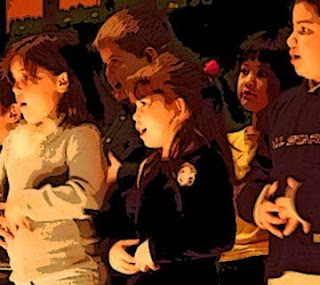 It has been difficult to get the feeling of Christmas with only the two of us, plus our giant black cat, in the house. We really miss the joy spread by youngsters as they help with decorations and cooking. However, we were able to witness a special Christmas pageant the other night that really warmed our hearts. A group of twenty or so children gathered on the warmly lit stage to sing, “This is the season beloved of the year.” By the next verse they were joined on stage by three little girls dressed in white and one in a glittery gold star costume. They gathered around the hand-held microphone and, with huge smiles, sang their part, “This is the new star, shining so bright, Lighting the world on that first Christmas night. These are the angels proclaiming the birth, Singing ‘Hosanna!’ And ‘Peace on the Earth!’” Mary and Joseph entered dressed in bathrobes with scarves on their heads and laid their Baby Jesus doll in the manger. Next came the shepherds also in their little robes and carrying their grandpa’s canes. Finally, on hands and knees, followed a three-or-four year old dressed in a wooly lamb costume. “These are the shepherds, humble and mild, Hast’ning to worship the heavenly child.” Mary and Joseph stepped center stage. “See the sweet mother, Mary so fair, Joseph who guided the donkey with care.” While they were thus occupied the lamb rose up on its knees, put its front “hooves” over the edge of the manger and peered at the child; then gathered the “baby” up and cuddled him while Mary, Joseph and the rest of the children finished the song.
Merry Christmas!
Children are an heritage of the Lord--Psalms 127
Posted by Leenie at 1:15 PM

I am like you finding it hard to get into the christmas spirit but I love these childrens pageant they fill me with childlike wonder.