We had lived in our house six months. Finally, after years of renting, we had a yard, a garden and mortgage payments.

June 5, 1976 was a sunny Saturday. We spent the morning outside and were contemplating what to do for lunch. About twenty miles away the Bureau of Reclamation was putting the finishing touches on the earth-filled Teton Dam. Suddenly, a neighbor came by and told DH he was needed immediately at the Civil Defense communication center. Reports were coming in that there was a leak in the dam. To be safe, I gathered up the kids, some diapers, a bottle, and went to stay in the break room of DH’s office on the hill. A soft spot had developed on the face of the dam. Before the afternoon was over, The whole thing melted like brown sugar and collapsed; sending eighty billion gallons shooting down the canyon like water from a fire hose. There were several communities and plenty of farms in the path of destruction. Fortunately, the loss of human life was small. Thousands of cattle were lost. The water shot through our town at about two in the afternoon, carrying with it mud and debris. Refugees gathered on the hill to watch store windows explode and houses lift off their foundations. Logs from the sawmill went like battering rams through building after building. 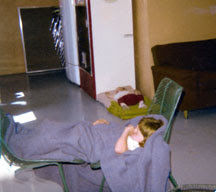 I fed the kids with cookies from a vending machine and bedded them down on couch cushions. The college had empty dorm rooms that were opened to the public, and soon assistance was delivered in the form of food and supplies. DH worked round the clock relaying messages to the outside by amateur radio. The rest of us stayed at his office until Sunday morning. Then I packed up our toddler and the kids and we walked down the hill to see what had happened. The flood waters were gone, leaving puddles in low places and devastation everywhere. There was evidence of water over five feet deep at our house. A neighbor’s house had floated away and tipped over; shielding our place from the force of crashing logs and wreckage.

Nevertheless, everything in our yard was mud-covered and destroyed.

Inside, the basement still held muddy water and sodden trash. Everything downstairs, including our television and 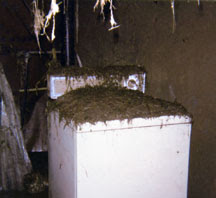 my new washer, was totaled.
The ground floor of our house was covered with several inches of sloppy mud. 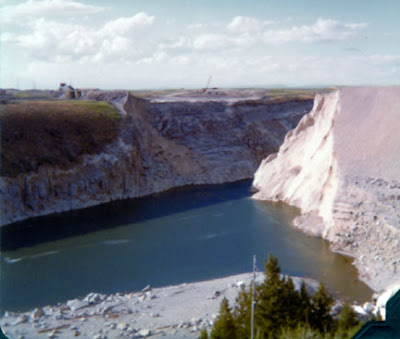 A few weeks after The Flood we went to the dam site to see what was left. The dam was almost gone 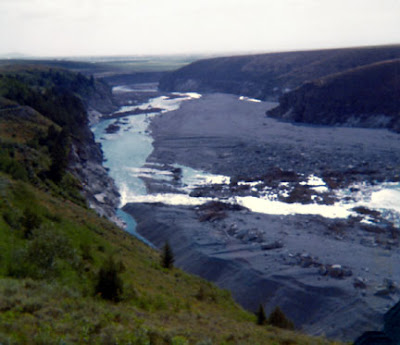 and its remains were spread several miles down the canyon.
With assistance in many forms the area has been able to recover and rebuild. Now, thirty-three years later, it is difficult to find evidence of the calamity. The high water mark on the surviving buildings has been painted over or worn away by time. 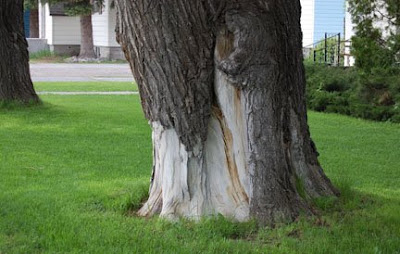 Still, there are many old trees with scars 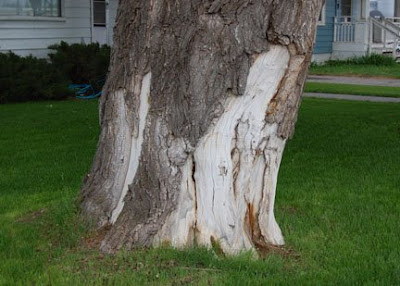 where their bark was ripped away on the north-east side. 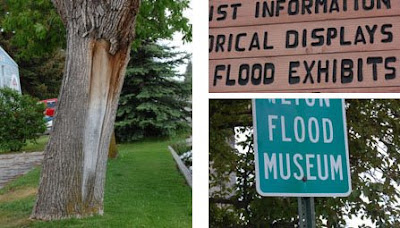 The town has a museum where school children and tourists can learn about the Flood of 1976. Most people who lived through it have a deep empathy for those who endure adversity throughout the world. Donations to trusted humanitarian organizations are generous.
Posted by Leenie at 6:50 PM

What to say? That is more than an incredible story. It was a tragedy of epic proportions. I am so glad that your family was alright. That you can give the full picture of the devestation and rebirth puts the ordinary details of one's life back into the proper perspective.

Powerful and touching, what an incredible experience to have gone and lived through. So luckly you had the warning ahead a time and were able to get to a safe spot...It really is amazing how fast ones life can change.

Mother nature said "damn that dam", what a beotch!
Glad that you all stayed alive through the mess of it all. Your pictures are striking, memorable, and like Brian said - visceral.

I tried not to be bitter with this post. But maybe I should say that after a bazillion more tax dollars were spent to clean up the mess and study the reason for the failure of the dam, it all came down to bad engineering. Wrong kind of dam and filled too fast. A learning experience for all involved.

Living through a calamity like that forever links you.

I am stunned by the bark marks on the trees.

An incredible post Leenie. What an enormous thing for a town to go through, and to happen so suddenly.This is indeed, a powerful post.