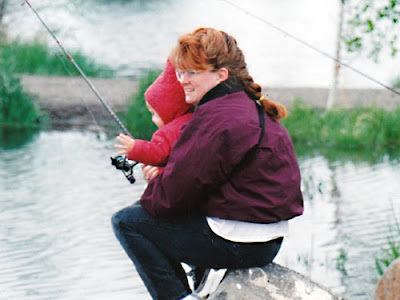 The pond (see previous post) is kept stocked with trout. And, although anyone with a pole and a hook can fish any time, the catch is usually minimal-- 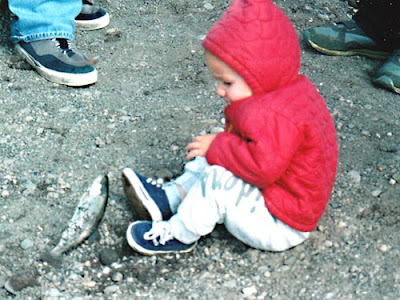 —and sometimes scary. Ducks are not the only domestic animals abandoned there. Someone must have become tired of maintaining their garden koi pond and jettisoned their big orange carp. Early in the morning when fish can be seen hitting the top of the water to feed on low-flying insects; occasionally there is visible a flash of gold and black. 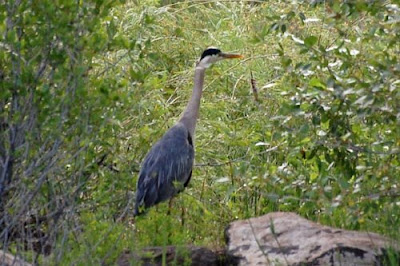 The bright colored fish are easy targets for this guy. 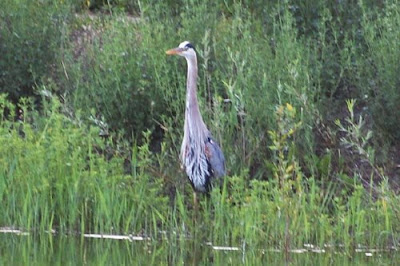 He stands motionless in the reeds waiting for minnows and other such creatures to swim near. In one movement he has his meal in his beak and flipped down this throat. Adapted from Wikipedia:
The Great Blue Heron (Ardea herodias) is a large wading bird in the heron family common near the shores of open water and in wetlands over most of North and Central America as well as the West Indies and the Galápagos Islands. 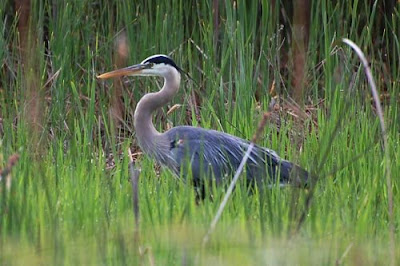 The largest North American heron, with a head-to-tail length of 91–140 cm (36-55 in), a wingspan of 167-201 cm (66-79 in), is blue-gray overall, with black flight feathers, black and white streaking down the front; the head is paler, with a nearly white face, and a pair of black plumes running from just above the eye to the back of the head. The feathers on the lower neck are long and plume-like. The bill is dull yellowish. 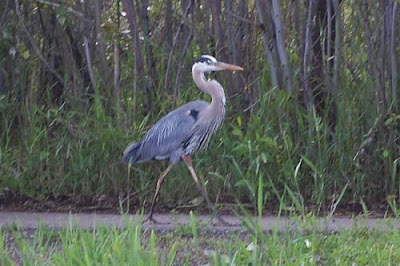 The heron stride is around 22 cm (9 in), almost in a straight line. Two of the three front toes are generally closer together. In a track the front toes as well as the back often show the small talons. The Great Blue Heron fishes during the early morning hours after the Night Heron’s shift is over. 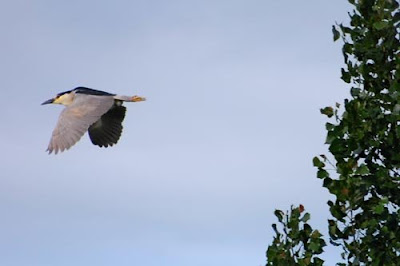 Also from Wikipedia: The Night Herons are medium-sized herons . The genus name (Nycticorax) derives from the Greek for “night raven” and refers to the largely nocturnal feeding habits of this group of birds, and the croaking crow-like call of the best known species, the Black-crowned Night Heron. 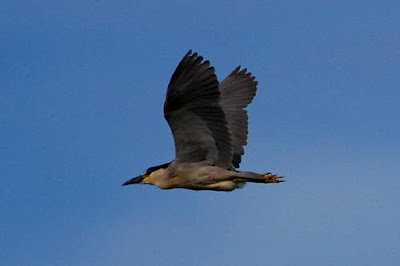 Adults are short-necked, short-legged and stout herons with a primarily brown or grey plumage, and, in most, a black crown. Night herons nest alone or in colonies on platforms of sticks in a group of trees, or on the ground in protected locations such as islands or reedbeds. Night herons stand still at the water's edge, and wait to ambush prey, mainly at night. They primarily eat small fish, crustaceans, frogs, aquatic insects, and small mammals. During the day they rest in trees or bushes.
Posted by Leenie at 9:14 PM

So, I have to ask; what type of bait were you using to catch the trout? We've only been fishing twice so far, but I didn't even get a bite from Salmon Eggs or Marchmellow's...thinking maybe it's worms they like?

Great photo's of the Blue and Night Heron, I didn't know there was a Night Heron.

Great photos. I really like the heron taking a stroll down the path. What a cool bird.

Leenie, you got some great Great Heron shots, close enought to see the details of their feathering and coloring. Interesting info, too....I had never heard of a "Night Heron" before. We occasionally see a Great Heron fly up from our sloughy creek area, but it never close enough for taking a photo.

Hey, is that you in the header photo?? Just going about your normal daily activities as a "Leener", eh?!

First night heron for me too.

Your photos are wonderful. Heron's are quite common here- fly overhead frequently and have a sanctuary just down the street where the dogs romp off lease. They are protected, not to worry...fences and signs and fines and expectation that people will be respectful of nesting herons.
Didn't know about night herons...they must have excellent vision.

I love the blue heron Leenie - we only have grey heron here in UK - there is a beautiful shot of a blue heron on Riverdaze's header - I look forward to it every time I go on to his site.

I love looking at the herons! This is a great post!

Great blue herons are such beautiful birds. Looks like the little guy doesn't know what to do with his fish!