Misty clouds were still hanging in the hollows of the mountains when I started out the next morning. The highway dropped down through the forests and leveled out at Spokane, Washington. The land opened up into huge farms that went on…and on…and on. I thought about getting out the other pair of glasses I keep in my glove box 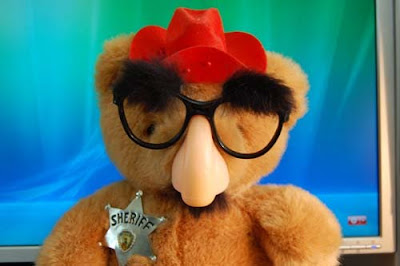 A sheriff from Texas-modeling my glasses (sorry Cindy).
When Hubby and I are on long, boring road trips and I am in the passenger seat, sometimes I put those glasses on and wave at the truckers we pass for the amusement of all. But, considering I was alone in my car--and already a hazard to myself and everyone else on the road---I decided against the idea. I exited the four-lane at George, Washington (love the name) and traveled through apple country. There were apple orchards, apple warehouses, apple packing houses, and fruit stands loaded with produce all along the way. I crossed the Columbia River at Wenatchee and took State Highway 2 into the Cascade Mountains. My route followed the course of the Wenatchee River. The highway was new pavement and paint and all busy with people traveling on their way to play in the woods. 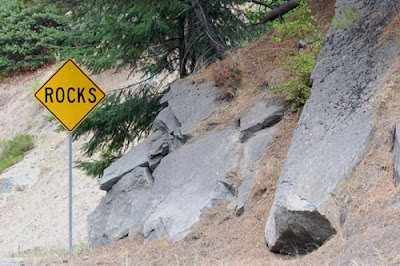 Not sure if this is a noun or a comment on the State of Washington
I pulled over to stretch my legs and take some photos of this waterfall. 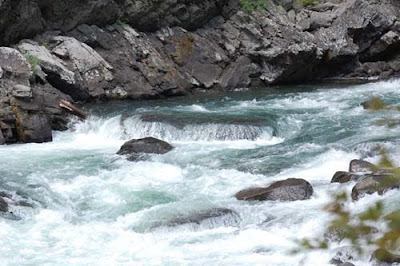 As I was standing there a group in their kayaks 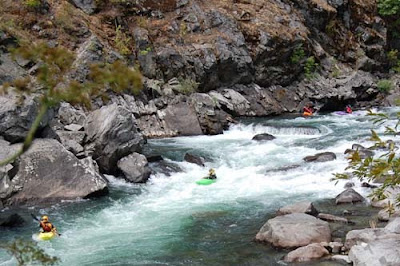 appeared and took turns dropping down through the rapids. 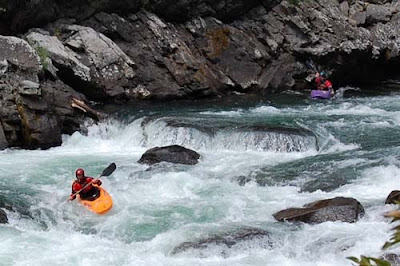 I went over Stevens Pass and nearly drove off the road when I caught a view of Mount Index decorated by Sunset Falls. 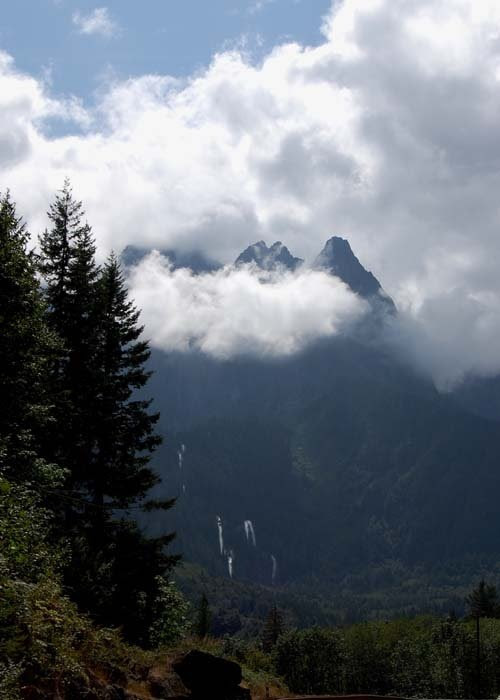 Sunlight was sifting through the cloud hanging on the crest of the mountain and glinting off the falls. I had to go 'way down the highway to turn around. Fearing the light and clouds would change at any moment I grabbed my camera and nearly high-centered on the guard rail. Most of the beauty was still there and, despite the traffic zooming away at my back, I had a special artsy moment with the clouds and the mountain and the smell of wild blackberries ripening in the sun.

I found my way to The Dreaded I-5. The traffic was even worse than I remembered from living in Tacoma when Hubby was in the army. I traveled far north of familiar territory and was soon looking for the exit to my motel. I had a weird déjà-vu feeling there because I had explored the area virtually on Google Maps. I knew exactly what I was going to see before I turned every corner. My assigned motel room was great. It was in the corner on the ground floor with big windows on two sides. I called the family back at home, unpacked, and relaxed on the queen sized bed. Total miles 840 (1352 km).
Posted by Leenie at 12:37 PM

Great pictures. Thanks for commenting on Weaver's blog... I never would have found you.

Wow - that was a fun side trip - loved the rocks pic and subtext!!

LOVERRRLY! So glad you decided to post rather than WHAT? Clean the bathroom???Glad you have your priorities in order.
wonderful photos, Ms. Camera Bags! The river looks like a stream- an important stream, mind you, until the Kayakers appeared...Whoa!
You are such a trooper- driving for hours and hours and hours- had I known how many I would have given you a butt massage...did I just hear you SCREAM? I know, a butt massage for two paintings - not brilliant on my part...sorry

Are you intending to make these lovely travelling episodes into a book? They make such lovely reading - I like the way you maintain the same feeling throughout. Those mountains are quite something - they make our "three peaks" (2000ft) look like pimples. Lovely post leenie.

Incredible photo of Mt. Index. A mountain like that kinda deserves a more majestic name though. Many of our beautiful places in Australia had stunning Aboriginal names which were superceded by colonial British wives's names, or hometowns in England.I digress...Mt. Index it is, and mighty with it..(do you think some settler was pointing at it with that particular finger??)

Washington state does "rock". Sounds like all the beauty created a road hazard!
Love your glasses. We'd call them "birth control" glasses. The truckers are probably a road hazard when you wave at them...