Friday DH and I went for a trip through  with our daughter and her family. 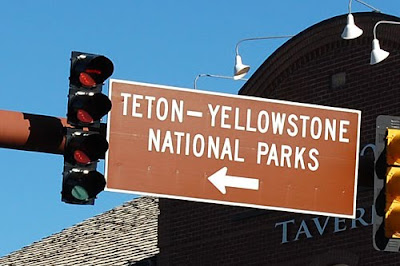 There were eight of us in their Chevy Suburban.  It was a test of family togetherness. 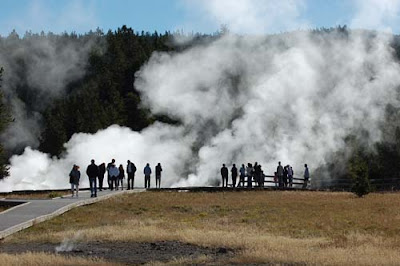 We saw lots of steam at geyser basin. 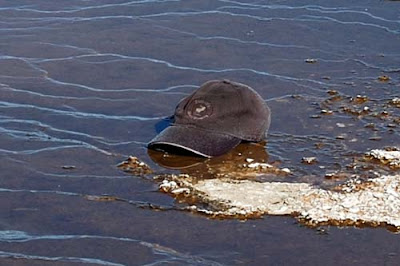 You may think this is just a hat that was blown off some tourist’s head.  In truth it’s all that was visible of a man who stepped off the boardwalk and became submerged in the mire near the geysers.  He was six feet tall.  He was sitting on a horse.  (Thank you, thank you.  You’re a great audience.  I’ll be here all week!) 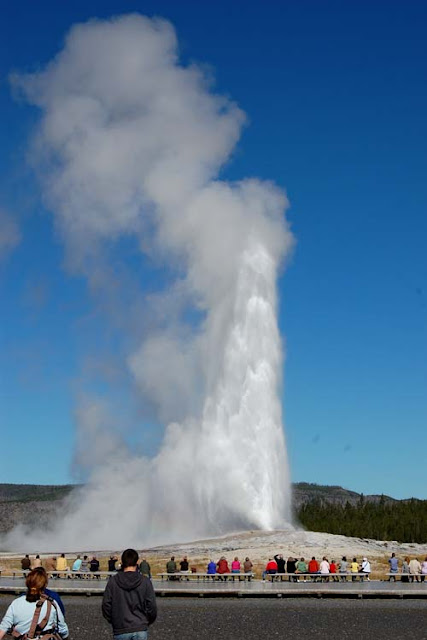 We saw a spectacular eruption of . After it was over and the crowds cleared we located the Old Faithful Internet webcam on a tree.  We called our other daughter in and told her to check us out.  She found the site http://www.nps.gov/archive/yell/oldfaithfulcam.htm and said she saw us all wave. 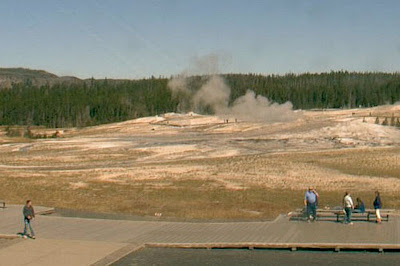 By the time she thought to save a screen shot of our debut on this world-wide web site (DH is in blue with the phone.  I’m on the right with the white pants)--two of the kids were resting on the bench and one had walked off pretending he didn’t know us.  Perhaps that was because while we were busy smiling and waving at a tree, another tourist came by and told us was in the opposite direction. 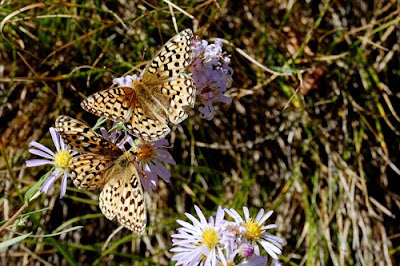 We saw all kinds of creatures from butterflies to -- 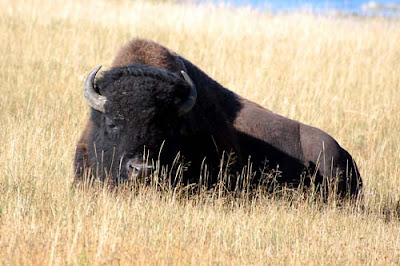 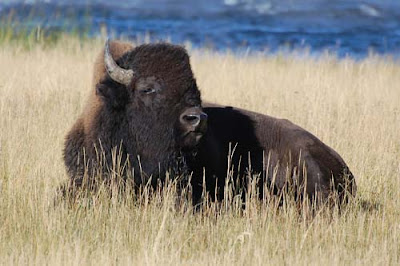 I took these photos from the car. Even though they can pose like movie stars (don’t you think at this angle she looks a little like Julia Roberts?) They can be volatile and dangerous. 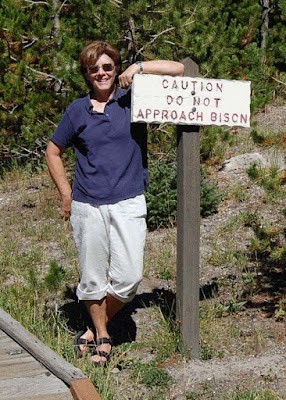 Yes, those old cows can be ornery and unpredictable.
Posted by Leenie at 10:36 AM

Ha ha on the hat! I like the look of the geysers, lots of fun! My forst thought when I saw the bison was how dangerous it looks!

Enjoyed that quick tour of yellowstone - one place in US that I have never been to, as well as Yosemite - maybe one day.

*applause* for the hat joke and the Julia Roberts look-a-like :)

The photos of the butterflies is beautiful and the bison look like they are living a good life there and are quite happy to pose for the cameras.

Looks like you all survived the family togetherness. And I'm glad I'm not the only one who causes my family to disown me temporarily in public - lol!

8 in a suburban is definitely a test.
Love the hat story.
Are you sure that "webcam" isn't the control center where Old Faithful is turned on and off?

Maybe one day we'll get there. All I've heard is that the park is soooo crowded in the summer, that it's annoying.
Maybe when the kids are all gone, hubby and I will visit in the fall.
You're silly---that last picture's caption. :)

Gosh i so believed that story about the guy...and WAIT what's Julia Roberts doing in WYOMING!!! I can almost scratch and sniff the pines- and the sulfur...ahhh, girl, you make me yearn....

Another super post! There is a webcam in Hawick http://www.hamishdsmith.co.uk/webcam.htm - I should pick a time to go and stand in front of it so that I can wave to everybody!

Witty as always. If you haven't embarrassed at least one relative on a vacation then you haven't let your hair down.

Oh, the bison are gorgeous!

8 relatives in one car - I am glad you survived that. I thought you might have pushed one of them into the water - hence the floating hat ...
I have heard people mention Old Faithful but I didn't know it was a geyser! (I probably thought it was an old geezer, hahaha.)

Looks like it was a fun trip! We were just saying the other day that for some reason we raised our kids without ever taking them to Yellowstone, although we went there as children ourselves. Don't know why.

But maybe Russ and I will go to Yellowstone and then let them look us up on the internet and then we'll all be there together. Great idea! (and we won't have to spend all that time in the car together . . )

Love the bison!!! And the lady by the sign!

It was a bit sqwishy but loads of fun. Here is an address for the live web cam at the park. You can watch it erupt live about every 50-80 minutes. http://www.nps.gov/yell/photosmultimedia/yellowstonelive.htm