The gas gauge on my car was reading empty, but I’d made it to the end of the week and payday.  I decided to take a few minutes on my lunch break to fuel up my car at the station across the street from work.
The station has three islands with two pumps on each.  Usually there are only three or four cars being filled at any one time. 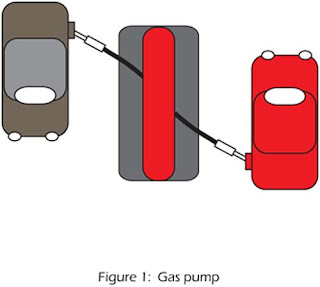 This time ALL the pumps were busy with more drivers waiting for a turn.
FINE.  I’d just get in line behind the nearest car.  But wait… 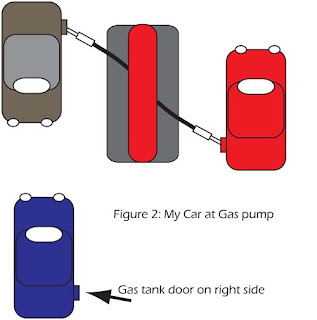 All the cars in line had tank doors on the left side.
My tank door is on the right.  This meant I’d have to approach the pump from the opposite direction.  If I pulled forward too close I’d be in the way of the car at the pump. 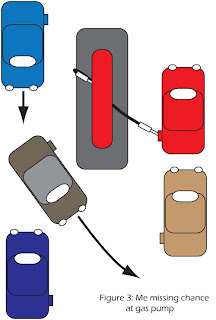 When the car I was waiting for pulled away; another car behind it took its place. 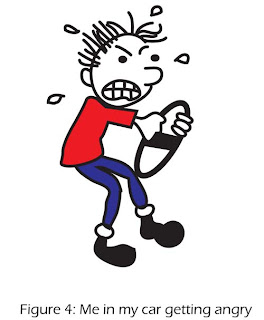 How was I going to fill my car?  And why was there such a crowd at the gas station?  Oh, yeah.  Thousands of students at the university were finishing up final exams and leaving for the Christmas break.
Sure enough, every car was stuffed to the windows with suitcases, small appliances, weasels, badgers, bicycles, guitars, snow boards, computers and pillows. Okay, I’m not absolutely positive about the weasels and badgers. 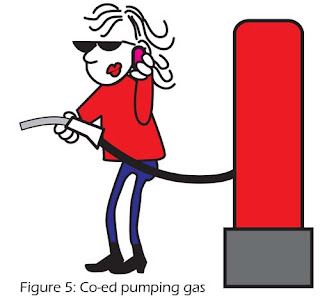 Gum chewing co-eds wearing painted-on pants were casually pumping gas with one hand and talking on their cell phones with the other.  I was pretty sure every service station in town would have the same crowd. 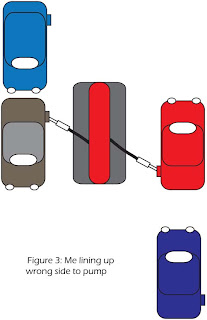 Desperate times call for desperate measures.  I pulled in behind the nearest car, even though my tank door would be on the wrong side. 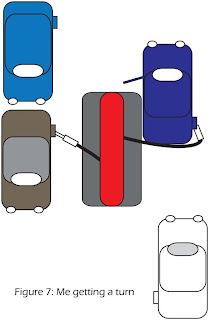 Knowing the hose might not fit across my car, I drove in as close to the pump as possible, but still forward enough that I could open my door and get out.  Fortunately, my car was small enough to make it work.
Now I’m thinking about sending off a note to Subaru to ask them WHY??  Why would they put the gas tank door on the wrong side?
Posted by Leenie at 5:45 PM

Aren't they in Australia? Come to think of it, our Subaru was the only car I've driven with the door on the wrong side. Gah! Great car, though.

This is where my being a retired master mechanic comes in very handy. Subaru is an Asian company therefor they use metric gas tanks while everyone else in the world, including the Brits and Aussies who drive on the wrong side of the road, uses SAE (Society of Automotive Engineers) tanks.

I KNOW the answer- Blame the Germans- they decided to put them over there because they did not want to get hit on the autobaun when they are filling their tanks from the can of gas they just walked miles to get because their cars ran out . True story- I heard it on Click and Clack!

Is it okay to say I'm cracking up over here, Leenie? I am going to dream of weasels and badgers talking on cell phones while wearing paint-on pants - because you know how brains mix up all that information.

And I can wait to hear Subaru's explanation! :)

This happens to me all of the time. I have some sort of mental block when it comes to remembering which side my gas tank is on!

hahahaha -- Great illustrations, Leenie! Thanks for the Monday smile.

Ya, well those are neat illustrations..OK, not sure as I don't own one, but plenty of stations like you to pull in one way..my car is pretty small so if I have to I often do what you did- just park closer and pull the hose to the other side? I thought you were going to say someone left their car parked while they went in to go get snacks! This seriously happens quite often here!

look how spelled my site above? I'm not drunk! lol)..I'm trying to get used to my new key board..honest

Here it seems pretty random which side your tank doors are on, but most petrol stations advertise long hoses to reach across the car - and have big signs saying DO NOT USE YOUR PHONE ON THE FORECOURT.(even if you own a weasel and spray on jeans)
I want to know if one has caused the petrol to ignite, and if so why here and not there?