A SOCK IN THE WASHER

“Only urinate in the river and only defecate in the bucket.”  I was the only female on the float trip and I broke both those rules.  I didn’t have the plumbing to casually empty my bladder while standing up in the raft.

“Wear a life jacket.”  The life jackets were dirty and smelled like wet dog and mildew.  But after the first rapid I was convinced they had a purpose.

DH and I were last minute members of a white water trip down the Main Fork of the Salmon River a.k.a. “The River of No Return,” which flows through some of the wildest country south of . 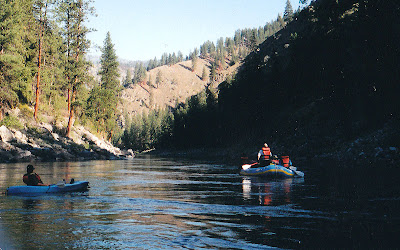 Our group went four to a raft with the experienced paddlers in back as rudders and those in front to provide the power.  Or, as in our case, to flail at the air when the nose came out of the water and to take drenching every time we hit a wave.

The rudder guys in back were out for a good time so our route was always through the wildest part of the rapid. 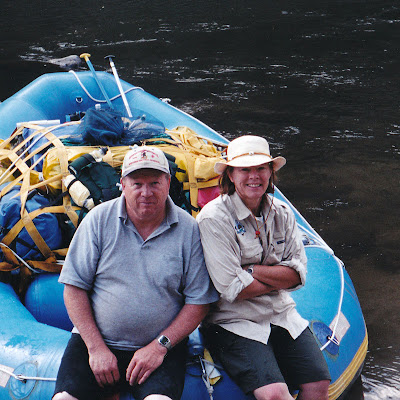 At the end of a day of white water we camped on the sandy beaches.
Every raft was loaded with ice chests full of tasty food. 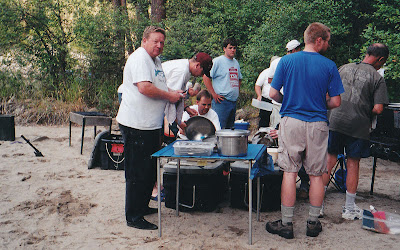 DH wondering when I will put down my camera and help with the meal.

After evening meals we swam in the river
or sat on lawn chairs around the campfire and visited. 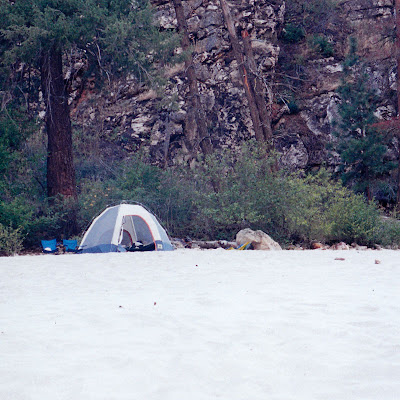 At night the weather was so warm we left the rain fly off our tent
and watched the stars go by. 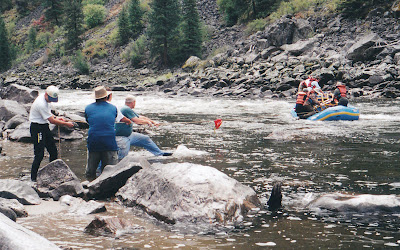 By the end of the week we’d traveled through plenty of rough rapids and beautiful scenery.  The last few miles were mostly through slow moving water as the river widened on its way to meet the in Hell’s Canyon.

One of the guys in the back traded places with one of the boys from another raft so he could travel for a while with his son.

We were within site of the take-out point. The low water had exposed some car-sized boulders and made white water of what were usually ripples.  Two of the rafts ahead of us took the left side of a wide falls that dropped over an eddy.  We followed, but the lack of experience on the back left us too close to a huge rock.

I reached in with my paddle to pull my side of the raft forward in the current. Then I saw we were shooting off a shelf of rock.  I stood up and turned to grab for the security of the netting which held down the gear in the raft. 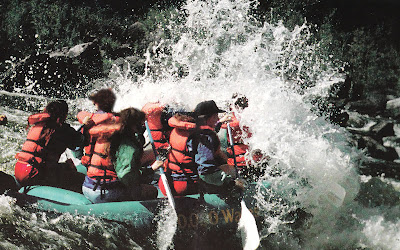 Another raft taking a dive into white water

Too late.  The raft bounced to a halt and I took a back flip into the swirling pool below.  The flight through the air was short; but long enough for me to grab a lot of air and think to myself, “This is not happening.”

I was tossed around in the whirlpool like socks in a washer .  The water was so full of bubbles that I couldn’t find enough purchase to swim out.  I came up once long enough to suck in some water and was slammed on the head by the raft as it lodged itself on the shelf of rock.  DH unsuccessfully tried to fish me out with his paddle.  Finally my life jacket brought me up and I floated free.  I looked back and saw the guys in our raft trying to work the raft off the rock.  My hat was floating next to me and I grabbed it.  A few yards down, the guys in another raft hauled me into their boat like a sack of spuds.

I had a cut over my eye and a lung full of water but otherwise was okay.  And I was SO in love with that dirty, smelly life jacket.

The next summer DH and I joined another expedition down the Salmon.  This time nobody took a spin in a whirlpool.
Posted by Leenie at 1:05 PM

This sounds like lovely holiday-exhilerating at times and relaxing at others. The tumble in the water sounds scary though!

NO! That is NOT fun! I don't care how lovely the scenery that is just not FUN! You even went back for more- oh girl- I can see that you are going to require lessons in what is fun and what is a death wish, the diff between the two. Thanks for your adventure story- it was not fun!

Quite a story Leenie - I could never do this in a million years!! However my sister had a similar experience in the Zambezi quite a few years back which convinced me it was a mad idea then! Good for you for having another go!

We are so not related. Double yikes.

See, now after a trip like that one, I wouldn't ever need to go on another one. :) Glad you got out of the 'washer'!

I can see how the adrenaline rush could be more-ish. :) What a cool trip, Leenie.

Sorry - just can't understand why anyone would do that voluntarily - unless they were under the influence of illegal substances!!

Scarey!!!Helped my friend when we were teenagers in a rough river situation, and although we both had lifejackets on, to this day she says I saved her life. Not too keen on the unpredictibility of these situations but guess it comes under the heading of adventure.Admire you going for it Leenie, but I prefer easier options..quite happy to enjoy these experiences vocariously-fun photos!

a friend of ours almost lost her life rafting... her big ugly hard lifejacket saved her from being eviscerated by a log and a rock.... but, she ruptured her spleen, bruised her kidney, broke her ankle, lost her glasses and was so black and blue I didn't recognize her when I was called to the hospital to help her make some decisions... ...

hers was the Kicking Horse river in Canada.... and it was in flood in spring.. I honestly don't know why that girl is still alive... she has had some narrow escapes in her life and that is a wild understatement.