There is a house in our neighborhood where some dear friends used to live.  They were retired farmers and they kept and cared for both vegetable and flower gardens.  Sadly, several years ago their health failed and they moved to an assisted living facility.
Their home has become student housing.  The renters come and go and the gardens are not maintained. 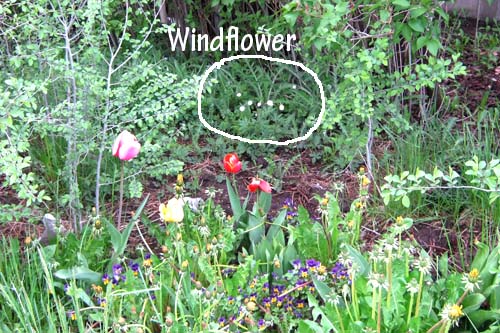 I walk by there often and I see how the weeds have grown up
and choked out all but the most persistent flowers.
One evening last spring I took my shovel and a bucket, and quietly dug up a portion of the white windflowers that were struggling to survive among the dandelions and elm tree seedlings.  They were “relocated” to my own flower garden. 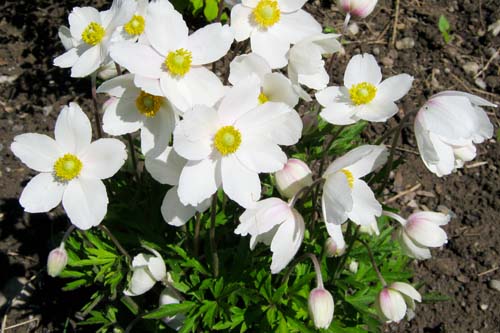 My rescued plants came up this spring and are proudly blooming.  I justify my bandit actions by telling myself that even if the flowers in my friends’ garden don’t survive at least there will be a memorial for them in my own yard.
~~~~~~~~~~~~~~~~~~~~~~~~~~~~~
Six or seven years ago our city began decorating for Christmas by stringing lights in the trees along .  The holiday display is attractive and sparkly.  Some other businesses in the downtown area followed suit and decorated their trees in the same way.
The strings of lights stay in the trees year-round.  Late in the fall the city checks theirs to make sure they are in working order.  A few years ago all the strands were replaced with bigger lights on new wires.  Not so one of the businesses.  After the first winter the lights were not maintained, but the wires were left in the three trees growing along the street.
Over time those trees have grown and the wires began to slice into the bark.  This was one time I hoped a product would wear out and rot.   But it was not to be.
One gray morning I took cutters to the wires and removed the strands as far up the trunks as I could reach.  As I continued on my walk I could almost hear the trees sigh in relief as they were released from their bonds. 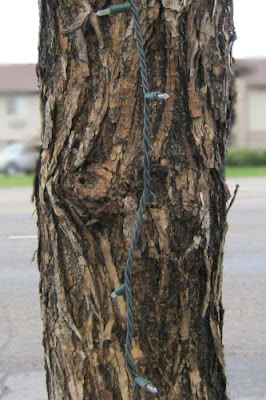 I hoped the remaining strings of lights would loosen and fall off.
But still they hang in there. 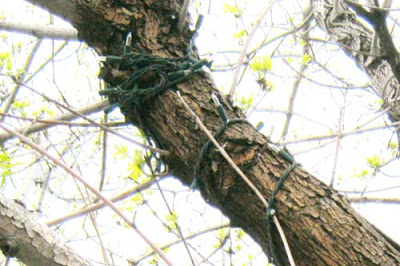 I’m not real good at confrontation so I won’t be going to the over-worked and under-staffed guy employees of the business to demand they free the trees.  But I get a little satisfaction from my own actions of liberation.
Posted by Leenie at 4:27 PM

I love the windflowers. :) And sometimes the lights carve interesting patterns into the trees if they're left long enough.

Both great things to do Leenie! The windflowers are beautiful and looking so happy in their new place. I bet your friends would be really happy to see them there. Poor trees being strangled by lights-thank goodness for you and your cutters!

I love windflowers. But it's too hot to grow them successfully in Queensland, Australia.

I am a plant liberator too. For the same reasons. Once, while trying to stealthily snatch a snippet of a poor, bedraggled, curb-side bush, I inadvertently took the whole thing with me as I swept past... the roots were not in the dirt and that's why it was dying. My family never let me forget it.

Good for you, Leenie!
I must say that when I had a garden I'd often share plants with friends and now I haven't got a garden I like visiting my old plants!

Yea, for saving the trees from the lights!

Well done to you.

I love the windflowers - I'm sure they are glad you rescued them. And well done on doing what you could to free the trees!

Leenie we think alike more than I knew. I admire your thoughts and taking the actions needed. I love the way you worded the tree's relief. You are a great person. I am glad I found you on here. B

Good for you!!! On both accounts!

Oh Leenie - I understand completely!I would do the same. I also hunt out the sick plant discount section in the nursery to "liberate and rescue" straggly struggling plants, just to see them eventually bloom - a bit of an analogy there with teaching too!
Your former elderly neighbours would be so pleased you noticed and cared!

I applaud you, Leenie! I'm so glad the flowers have a new (and beloved home) and I know the trees are grateful.

A little civil disobedience is a good thing now and then, Leenie. Wish I were a brave as you! And I think the flower theft was actually an act of mercy and kindness toward your elderly neighbors. Keep up the good work.

oooohhhh you and i have a lot in common, you have no idea!! hahaha we are going to get along famously!!

i love your blog and your spirit.

thanks for finding me, was it buttons or texwisgirl?? both amazing peeps!!!

You free those flowers and trees!!!!! They have feelings too. ;)

Leenie-Thanks for letting me know about the windflower story and look, I got two stories!!! Those windflowers are gorgeous. On the list......for next year. Today I'm heading out to Kansas to start planting all the things I've collected all summer....still have no idea where they're going but frost will happen soon so they're just going in anywhere. Hopefully Roto-Tilly won't take too many of them out. Not so much with her digging aptitude, more with her sitting on top of things I just planted. :-P I might rename my blog "gardeningwithdogs." Haha. Good for you for rescuing that tree. That's a serious electric noose on that poor thing!