I'm back. Our expedition was most excellent.
I'm going to try not to get to travelloggy but still share some of the adventures scattered among my other posts.

My dad spent his childhood on the Washington-Oregon coast. 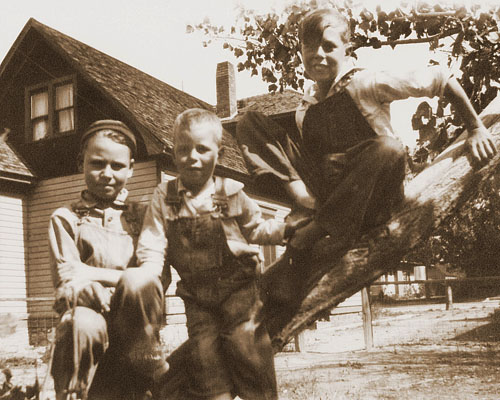 Dad, on the right, his friend on the left, and his little brother in . 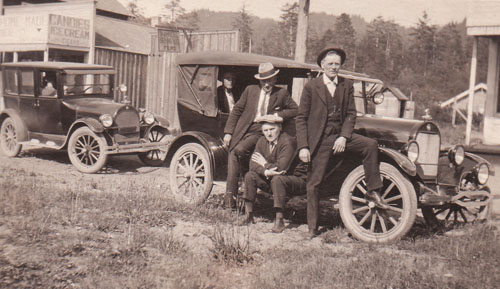 Some of Grandpa’s co-workers from the lumber mill in Tillamook  circa 1920.

Although I’ve lived most of my life in , I find myself visiting the again and again. It could be some kind of ancestral attraction like the generations of robins who return every year to revel in the ripening fruit of our cherry tree.

DH and I were only married a little over a year when he was drafted into the army and stationed in near .  We lived there for over a year with our first baby. Even before that I’d been to to visit cousins. Later there were several road trips, workshops, a work seminar, and then, M/V David B at the

last September, DH and I went on that extraordinary five day boat ride through the San Juan Islands of .

Then, a couple of weeks ago, we learned that Captain Jeffrey and his wife, Christine were looking for passengers to fill in some last minute openings on a tour of Desolation Sound, DH and I got out our passports and found our way on board for a trip into the British Columbia Inside Passage.

A short video of the view from the deck of the M/V David B
as we leave Bellingham Bay, Washington
You can hear the chug-chug of the old engine that
powers our boat.  The David B is a 1929 restored
65 foot motor vessel.

Labels: David B, Inside Passage 2013, travel

Welcome back or should I say too bad a much longer trip would have been fun.
I love the chug chug sound now and then. You are so lucky to have some real connection to the west shore I don't but wish I had.

Your Dad was a cutie:)
Oh I want to go now you make me so jealous. I would ask if you had a good trip like most people do but I already know the answer. Beautiful. Hug B

how cool is that?? Loveed the "chugging"!

and in the know, a "tally Man" is the guy who climbed the woodpiles in the river (old days, it was either float the river or by train - in WI you can still see some temporary tracks in large woodlots on the NE side!) who would carry a tally counter, and a tally marker - a hammer with the companys brand on the end - they would slam this onto the end of the fresh cut log after they were done counting it - "tallying" - the number of the sawn logs! and they still do this today...except with a can of tree spray paint or a lumber crayon in a trainyard LOL ;p

when we did small woodlot owner timber sales ten years ago, guess who did some climbing and counting?

Buttons: Thanks. I had so much fun I'm jealous of myself.

joeh: Sounds like the African Queen but the conditions were much better. As Rosie said to Mr. Allnut: :"Now that I've had a taste of it I don't wonder why you love boating."

Feral: Thanks lots for the info on a tally man. I was told my grandpa used his mental math skills to estimate and record amounts of lumber as it went into the train cars. It's good to know more about the job. This also explains the "graffiti" I've seen on lumber.

Oh...how fun. I loved the sound of the old boat. I also enjoyed your family history/photos!

Our famiy visited family also- i was a child- from the wastelands to lush beauty- I swore to live here one day...I must be good at swearing because I have lived here now for about 43 years. Love the sound of the boat, very comforting. Love your "skills" , your productions! Very good , Leenie!

So cool, Leenie! Awesome photos, too (as always). What a neat trip! And those old photos are so completely charming. :)

There is something completely mystical about the waters of the PNW. I'd never seen them until 4 years ago, but they spoke to my soul.