IN THE LONG RUN

After months of training and anticipation the big day of the Ogden Utah race arrived.  My crazy running children and some of their family rode on one of the buses that took the runners way-way-WAY up the canyon to the start of the race. 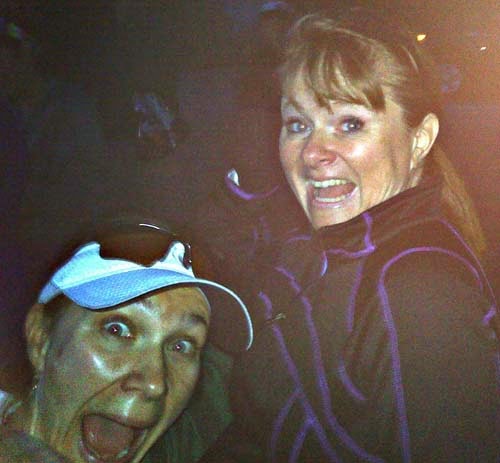 CindyLooWhoo and Greasy Lightning were super excited to be up before dawn. 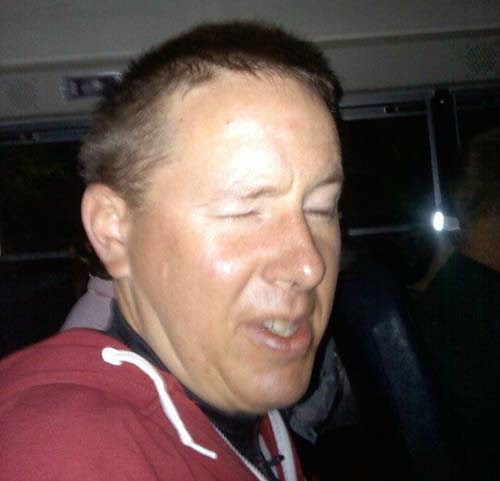 Greasy Lightning is so fast you can’t even get a good picture of her.

They were joining 3,500 runners in the half marathon.  The 2,500 who would run the marathon rode other buses another 13 miles farther out. A little over an hour after they started their race DH, CindyLooWho’s hubby and I went to the finish line to watch them come in. 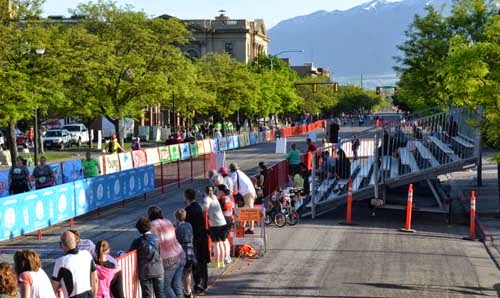 We chose seats on the bleachers so I could see over the crowd. 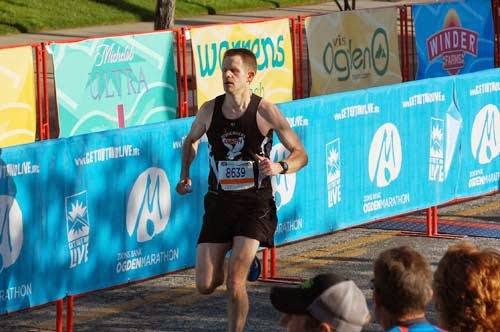 The first three runners in the half marathon came in close together.  The winner’s time was a little over one hour and eight minutes. 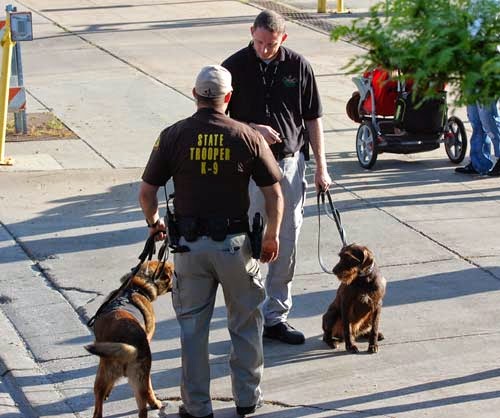 While we waited for our own favorite racers I took pictures of things like all the security guys, some with their K-9 buddies. 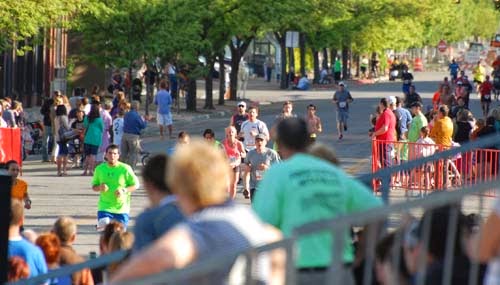 I knew Bobert would be wearing a gray shirt and a baseball cap.  That describes at least two guys in this photo.  None are him. 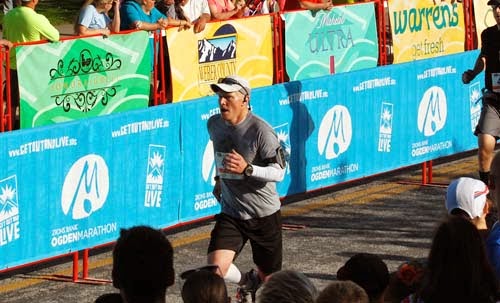 Then faster than a speeding bullet he shot past. 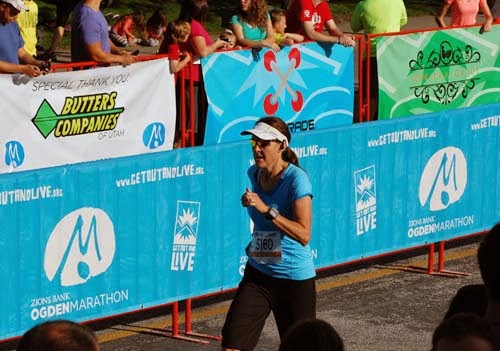 Greasy Lightning would be wearing a light blue shirt and white cap.  This is not her.
Right after I took this picture a lady with big hair got in front of me.  So I moved up the bleachers. 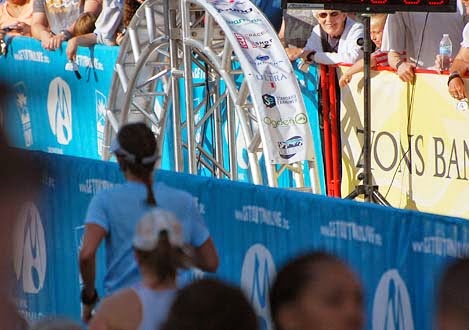 In that moment of inattention Greasy Lightning went by.  I got a photo of the back of her head. 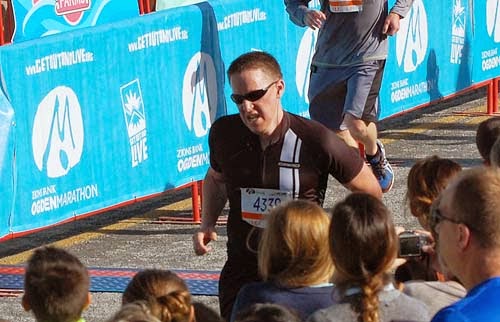 Beavis came in with a big kick and passed several of the other runners in the race to the finish. He beat his goal by several minutes with a time of 1:56. 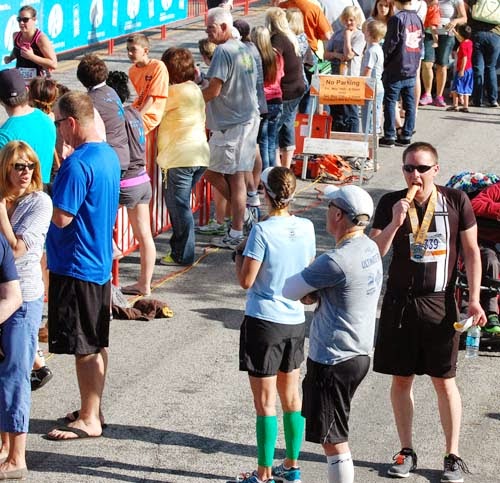 The first three picked up their medals and some treats and waited for CindyLooWhoo. 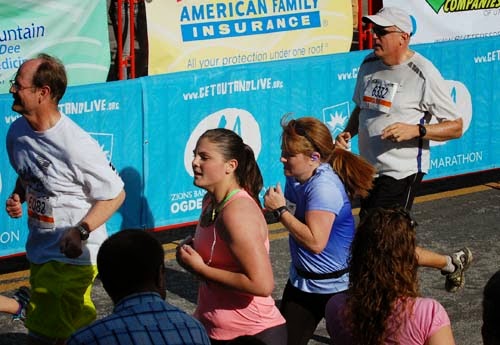 She came in well under her goal and finished at two hours and eleven minutes. 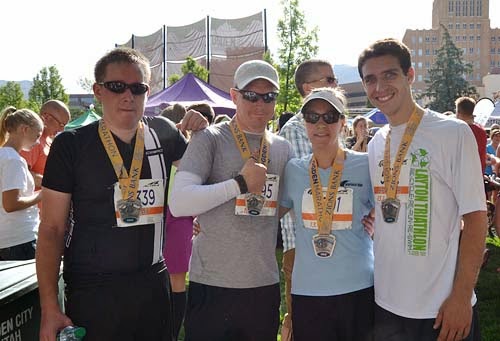 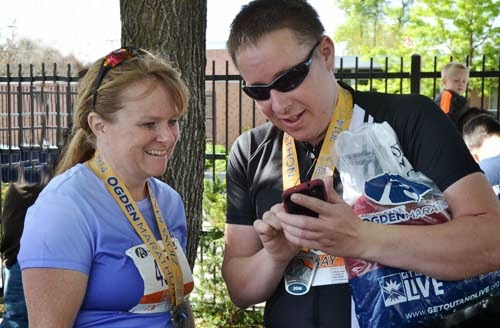 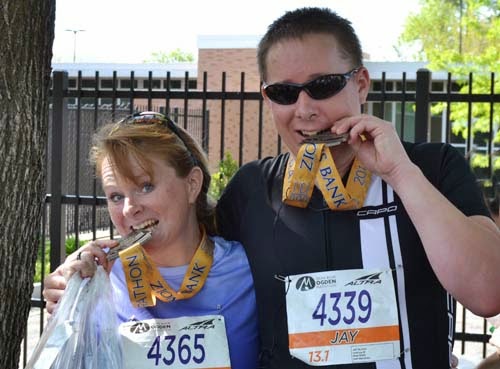 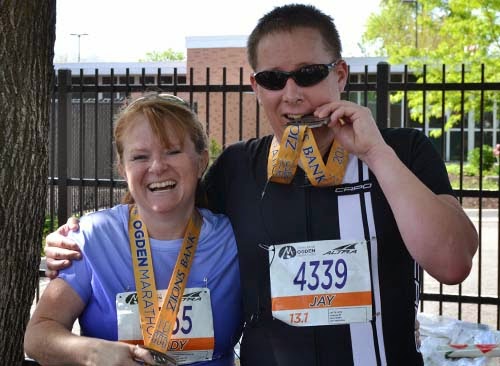 Now, where’s the chicken dinner?
Posted by Leenie at 6:19 PM

I would think anything under 2 1/2 hours is very respectable!!

Good times! Thanks Mom for being our Main Documentary Person for this whole crazy trip!

Thanks Mom for being our "Main Women" for this Documentary of craziness! It was a blast all the way along! Your pictures and encouragement made all the difference! WE LOVE YOU! -
Sindyloohoo and Beavis

Congrats to them! I admire those who run. The only time I get up to those speeds is if something is chasing me. :)

Congratulations on a race well run - and beautifully documented!
This looks fun but tiring.
I like the security dogs too!

They did a great job! Maybe next time they'll convince you to join them! :)

I think I experienced a runner's high just looking at that picture of them checking their times.

'm always impressed at those that run!

I've always admired runners, but find I cannot run without feeling like an old galopy. Good on them for finishing under their goal times!