AN ANSWER TO AN AGE-OLD QUESTION

The guys left before dawn to go fishing.  I decided I shouldn’t waste a good day cleaning house or even painting pictures.  I took my cameras and drove to Grand Teton National Park just a little over an hour away. 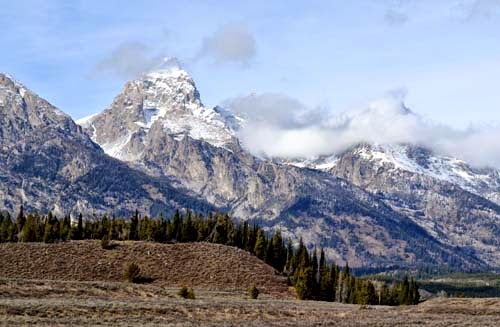 No matter what the weather or time of year the Grand Tetons are always spectacular. 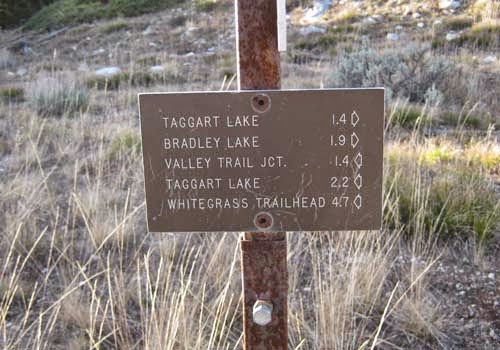 Even though most of the park is closed after October there are still trails along the edge open to the public.  I decided to hike to Bradley Lake. 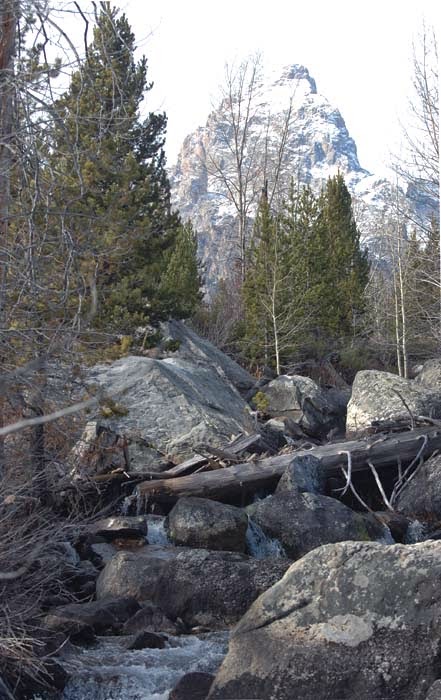 The temperature was mild for autumn and the snow line was still high, 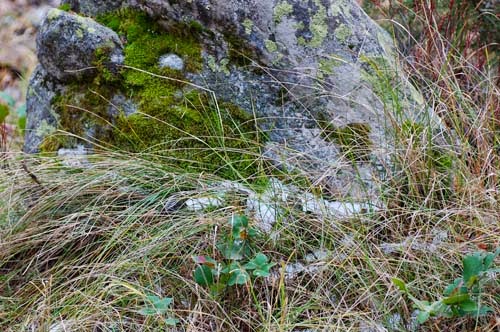 ...although remains of a light snow could be seen in shady areas.  I parked my car at the trail head and walked past the empty corral which in the summer held horses for riding.

There were a few hikers with big backpacks who looked like they were returning from overnight camping. 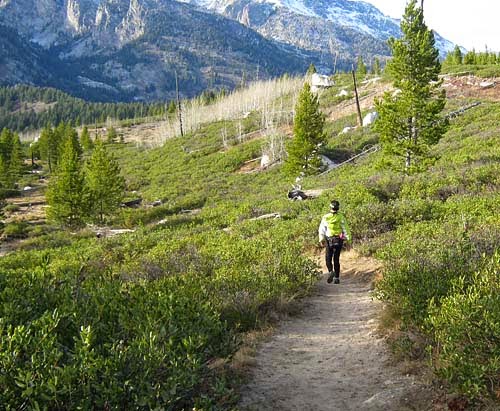 Others were there just to walk around and take a few photos.  Some seemed to be driven to beat some speed record, marching along, head down with two hiking poles and not a glance at the scenery.

I took my time moving up the trail.  It was steep going over the rocky ridges left behind by ancient melting glaciers. 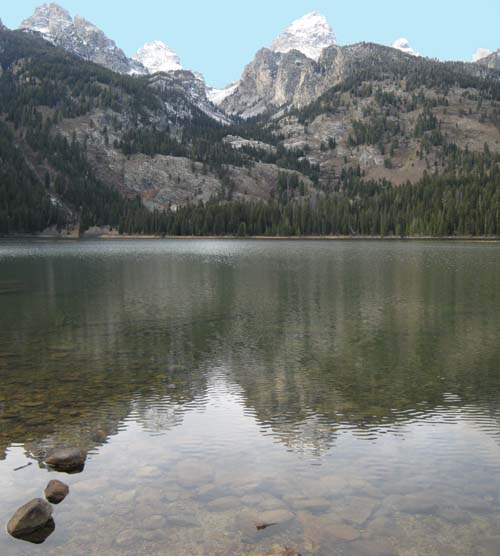 Bradley Lake rests in a bowl at the foot of The Grand. It was clear and deep and acted as a mirror reflecting the frosty mountains. 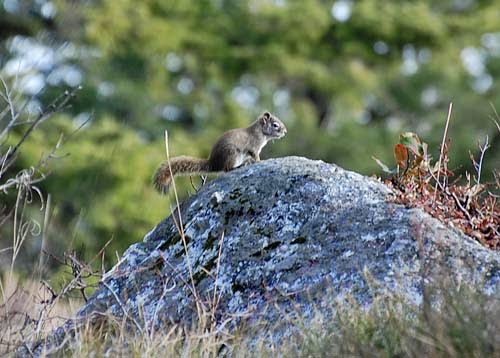 No other hikers were there. It was quiet, too quiet.  Even the birds were silent as the sun rolled through some soft clouds and moved toward the horizon. 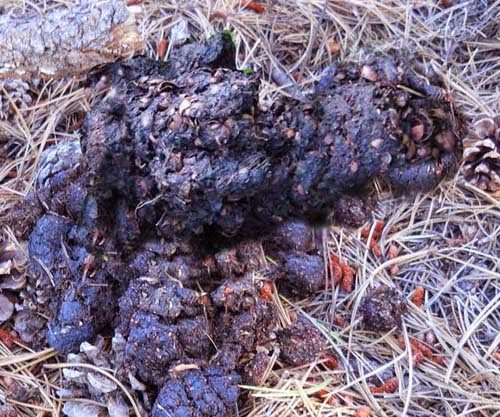 On my way back down the trail I almost stumbled over a huge, fresh pile of poo.  It wasn’t biscuits left by trail horses or deer pellets or elk nuggets.  It was blackish blue and full of nuts and berries.  Either Yogi or Smokey had recently made a pit stop.  Crap!  I guess this answered the age-old question. 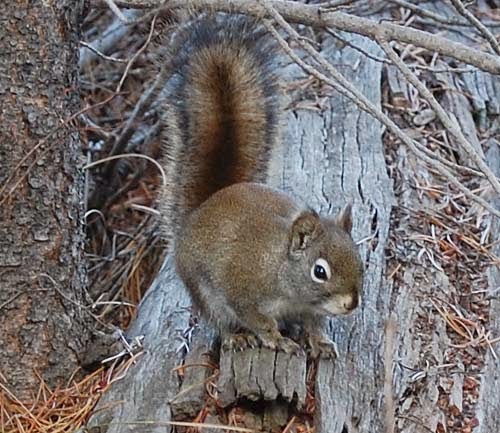 It was all downhill from there.  I hustled along whistling and humming and keeping my eye out for big shaggy creatures.  I thought they were supposed to be hibernating at this time of year. 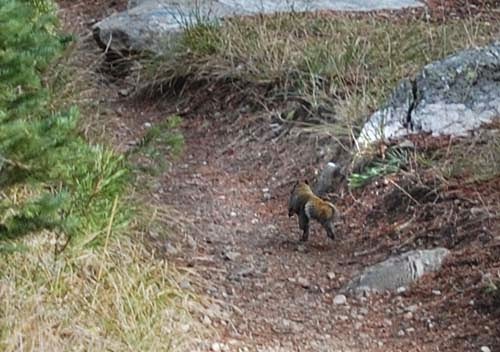 Funny how a shot of adrenaline can add a lot of energy to tired legs.
Posted by Leenie at 2:18 PM

I LOVE your nature posts!!

You should be carrying a bear bell.

If it looks like bear crap with berries, and no one is around...get the hell out.

Nice post, great pictures, and an age old question is answered. Love it!

Scat scatting, as it were.

Oh I can see some beautiful watercolours coming from this beautiful little adventure. Try to restrain from one of the Bear Poo:) Hug B

That is just breathtakingly beautiful. And I don't mean the bear poop, though it is attractive enough, as bear poop goes.

BTDT. It does put a spring in the step for sure.

I loved your neck of the woods when we were there a couple of years ago. I'm glad you didn't meet the depositor of the poo

Do you now how lucky you are to live in such a gorgeous part of the country?! I'm sure it's not all fun, especially in the winter, but wow! As for the bear poop...yikes! It's good he apparently had enough berries to eat...he wasn't interested in you! :)
On another note...I just noticed when I was looking up my doctor's (for my back) credentials online the other day...he attended school in your town. Not that you know him or anything, but I thought of you when I saw the info. I'm sure your life is complete now that you know that. :)

Absolutely stunning shots, Leenie. What a place to explore! I'd be eaten by a bear for sure because I'd be so distracted. Thankful that Yogi and Smokey didn't show up for you. I'd be a running fool! :)

stunning, breath taking, LOVE this area too much! Glad it has not become a commercial path with soft drinks along the way and jewelry made out of digested berries.Really amazing shots of an amazing place, a decent short hike through the most magnificent areas! Glad you got out in it! Bears don't scare us!!

If I lived that close to the Tetons I wouldn't waste a beautiful day inside either!

I grew up in Jackson and moved away after HS. My parents moved away too so I haven't been back since! Miss it! And miss the Tetons! Great pictures! Thanks for sharing!

Ha, you answered the very question I was thinking---are you afraid of running into bears or mountain lions when by yourself?
Beautiful scenery!! Except for the bear poo! I guess it's good you didn't see it until on your way back. That way you had time to enjoy the hike and surroundings.

Stunning photos - you are quite right to have high tailed it out of there before the poo manufacturer re-appeared!

Hahaha - that sounds exciting. I remember seeing Grizzly as a teenager and thanking my stars that I lived in AFrica ... On another note - is it really safe to walk in a nature area like that on your own? - I am talking humans - not animals! If so, you are SO lucky. We are always warned in local newspapers and by police to avoid walking on the nature reserve which is right next to our home - muggings. etc. happen more and more often, and we are always admonished to walk in groups.