The Virtual Paintout is visiting Rome this month so I went along to see where Google Street View could take me to set up my easel.

Since the cameras stayed mostly on the street there was no looking inside the Vatican or the Sistine Chapel.  But that’s okay because there’s a virtual tour of the chapel which takes a while to load but gives a chance to examine everything there at leisure without the crowds.    http://www.vatican.va/various/cappelle/sistina_vr/index.html 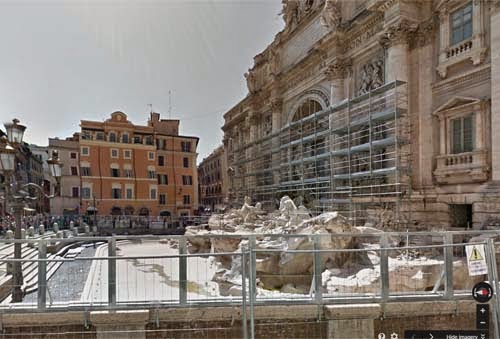 Another disappointment was seeing the Trevi Fountain drained and being renovated.
A news story by the BBC, related in a very Cumberbatch voice, can be found here.
http://www.bbc.com/news/world-europe-29175316

Still, there were several museums available for virtual tour, mostly filled with lots of marble statues in various stages of undress, and lots of chunks of columns and relics from ancient structures.

No Google Street View car went down the Spanish Steps like cars do in every action movie shot in Rome. 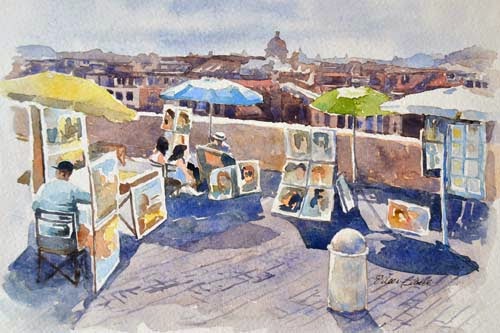 But I found a great view of the city from the top of the steps which I used to create this painting.

There is also a very thorough tour of The Coliseum. 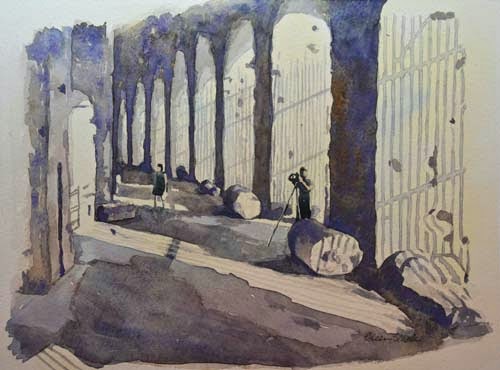 So I used one of the halls where a guy was doing a photo shoot as my next subject.
see my location here:  http://goo.gl/maps/abUvL

Then I virtually wandered down into the city and noticed an exhibit of Warhol Paintings was on display there. 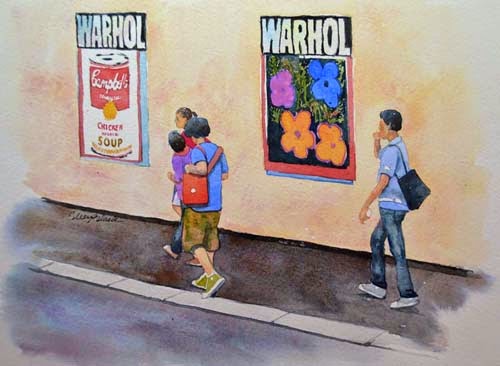 So my last painting was a driveby of the show posters.
Posted by Leenie at 11:00 AM

the last one is my personal fave, though all are awesome , you do that thing with paint and water...just awesome all over the place.

I like the rooftop view the best. It's a really neat perspective of the city!

I feel like I have been around the world in three minutes.

I LOVE your view of the city from the top of the steps!!

You are stunningly good!