As I’ve mentioned, DH and our sons enjoy ice fishing.  I’ve gone with them enough to know for certain that I don’t have the same metabolism to tolerate sitting still for extended periods in temperatures well below freezing no matter how warm I’m dressed.  However, if I’m moving around enough to keep my blood circulating, as in cross-country skiing, I can enjoy outings in winter weather.

So I told the guys I’d like to tag along on an ice fishing trip but I’d take my snowshoes and wander around taking photos while they fished. 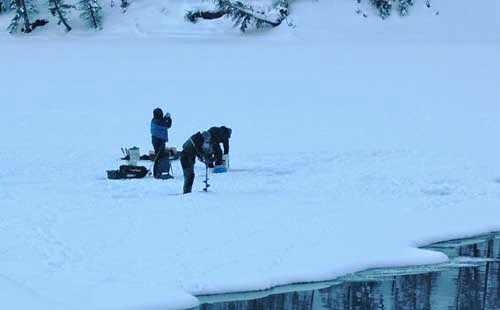 While they drilled holes and baited poles on a reservoir so close to the dam that water didn’t freeze, I put chemical hand heaters in my gloves and stuffed my gloved hands into mittens with chemical heaters in the end. 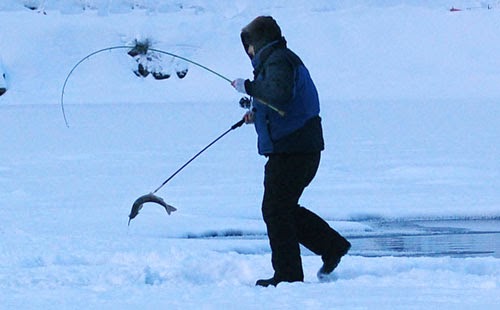 Before I could snowshoe down where they were, Beavis had landed a big trout he caught while waiting for holes to be drilled in the ice. 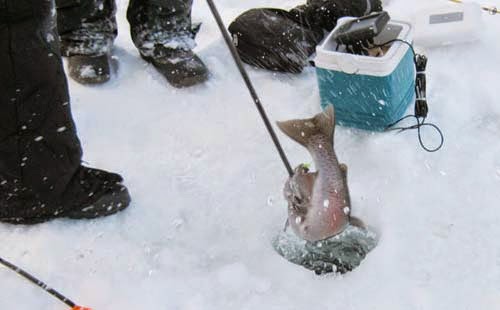 The guys were where the fish were hanging out and had their hooks baited with an irresistible combination of worms and magic juice. 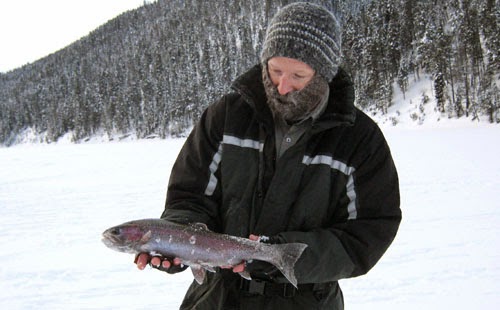 The fish were getting hooked so often I decided to stay around and film the action.

My big problem was working my cameras.  My cell phone’s touch screen meant using bare fingers.  Not fun.  My little Canon Powershot’s batteries faded fast in the cold.  Even my Nikon wouldn’t shoot at its usual speed in the icy air. 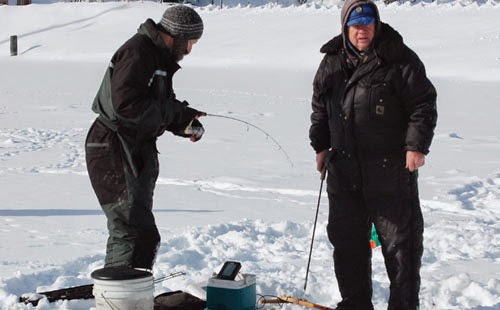 Still there was plenty of action from the guys on ice.  So I did what I could to continue taking photos and video. 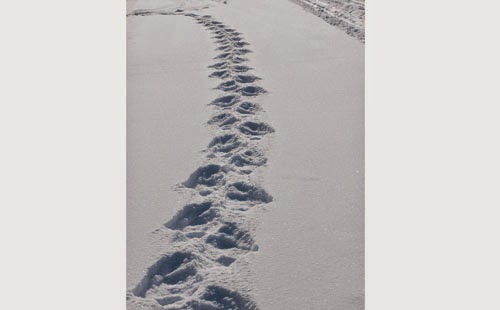 Finally I wandered off across the lake to take pictures of the incredible scenery of this Montana winter landscape. 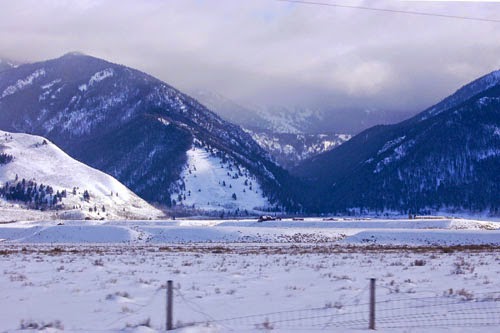 Even though my fingers and my cameras were not happy about the arctic conditions, 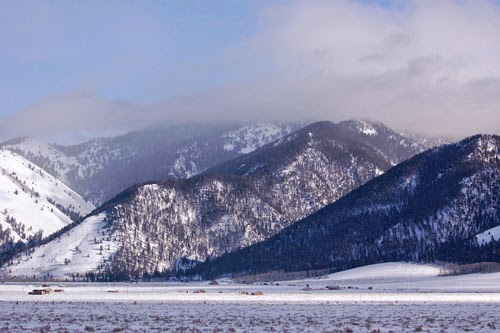 …my eyes loved the view. 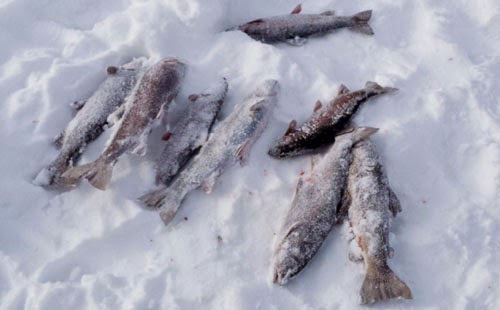 These are just some of the big trout the fishermen caught.  It was so cold the poor creatures froze solid after only a few minutes out of the water.

This is a movie I made from the photos and video I shot.  The fishermen asked me to put it on YouTube so they could show it off to their friends.  It's a little over five minutes long so you may want to get your popcorn ready.
Posted by Leenie at 9:33 PM

I've never been ice fishing--I don't think I ever will!!

Good haul. I've been ice fishing in a 'hut' but never on the open ice. Brrrr.

My granddaughter works at the ski resort, putting people on or off lifts all day, or helping them stand up, or carting dropped ski poles back to their owners. She loves it. Zero and snow and all.

Save some for the rest of us!

whoa, this is nuts!

The sky and the mountains BEAUTIFUL!

Does look a tad cold there!

That will make a lot of fish sticks!

Ah, love it...and I get hungry as a bear just looking at that trout on the end of the line...

looking at those pictures...i'
d say you'd have to be a REALLY die-hard fisherman to go out in THAT...without any kind of little hut or covering. yikes!! i'm surprised the fish don't freeze on the hook! i guess you don't have to drag a cooler for the fish. just toss in a bag!
NICE haul that day!! wouldn't want to go through that with NO fish for dinner at the end of the day!!