I’ve been spending some time hiking the Highlands and driving through the Lowlands of Scotland--virtually--using Google Street View.

Scotland is the location of the month for The Virtual Paintout, which is a website hosted by Bill Guffy.   It “uses Google Street View as a resource for traveling the world to find interesting locations and subjects to paint.”

It is always interesting to explore a place so far away and so different.  Scotland is on my bucket list so I found the rocky streets, stone houses, cathedrals, churches, and fields of sheep intriguing even if I was limited to the roads traveled by the crew with Google Maps. 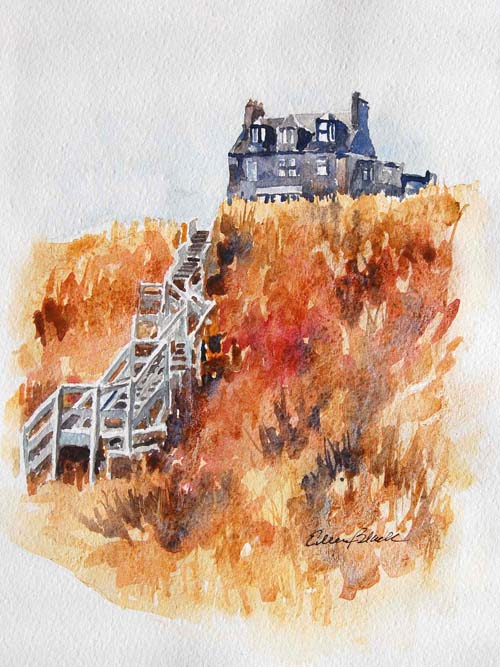 I was exploring the coast looking at lighthouses and fishing boats, but this house on a hill caught by eye.  I was challenged by the perspective and angles of the stairway to this home in Boddam with a view over the North Sea. 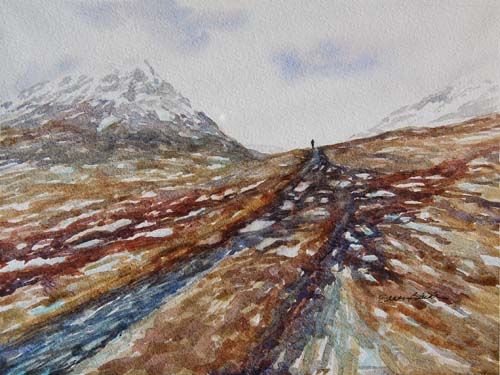 I discovered the Street View crew had taken their wrap-around cameras for a hike in the Highlands.  I followed along to see the stark, rock-strewn pass through the mountains called, “Lairig Ghru.”  Long ago the remote path was used by raiding parties.  When times were a little more peaceful it was used as a trail for droving cattle.  Now it is part of self-guided hiking trail system for trekkers. 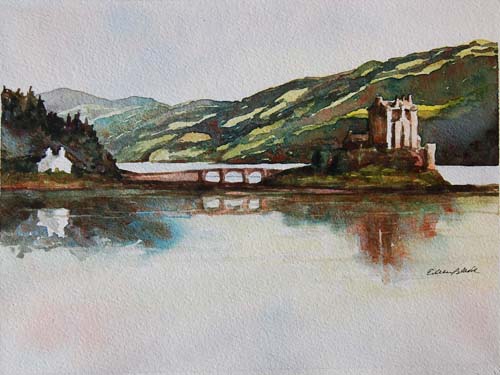 Although most of the Street View skies were overcast and gray, the cameras caught the picturesque castle of Eilean Donan during a clear evening.  This restored castle from the 13th century sits on a small island where three lochs meet.  The water line was a little low so I used my magic paintbrush to raise it above the mud and smoothed out the water to create a nice reflection.

On a personal note the Gaelic word for island is, eilean.  Change one letter and it matches my name, Eileen.  If you look up the meaning of that name you’ll be told it is a derivative of Helen and it means, “light.”  I think that meaning wasn’t researched enough.  I kind of like being an island.

Very nice. I particularly like the castle on the island.

Well dang it. Someone one should say it!

"No man is an island, Leenie."

No, Feral. No man. Heh, heh. And therefore, never send to know for whom the bell tolls; it tolls for John.

That's a big hill for the Lowlands...says Val, who has never even been on a virtual tour.

Thanks for the tour! I guess since your name and island are almost one and the same, you surely must go for a real visit some day!

I would love to tour Scotland...if I had to pick ONE area I would go for the Highlands, but to see the whole land would be a huge treat.

Lovely paintings, as always--especially the first one!!