SHOOTING IN THE DARK

A few days ago Weaver of Grass posted a great photo she took of the International Space Station docked with the Space Shuttle Endeavor as it orbited over her part of the world. Here in Idaho we have observed the Space Station overhead a few times. I got it in my head to take a short time lapse shot with my zoom lens as it streaked past the stars. I found a website that gave the times when the ISS would be visible here. I knew it would be easy to see but moving fast. The first night it would travel low across the northeast horizon just after dark. I remembered to take my lens off auto focus, set it on infinity, and set the shutter speed for about three seconds. Right on schedule a bright, bright unblinking light came shooting across the sky. I immediately realized a tripod should have been part of my plan. Not only was it tricky to capture the target with the long heavy lens, but it was impossible to keep my camera steady. The pictures looked like star smears and black and white scrambled eggs. Bleeeeh. 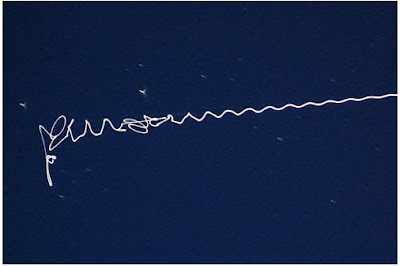 The next night was clear with no moon. The mosquitoes were hungry. The big bright light traveled right overhead. I was ready out on the lawn with my tripod and camera. I couldn’t find the ISS in my viewfinder. It was halfway across the sky before I discovered I had left my lens cap on. Ack! I pocketed the cap and got the big light in sight. I got off a few shots before it disappeared like a wad of Tour de France bicyclists. But when I’d taken the camera off auto focus I had also turned off vibration reduction. Each careful pressing of the shutter had sent my flimsy tripod into seizures. 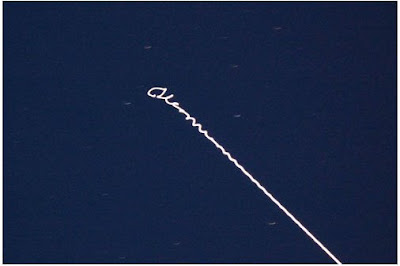 I got out my remote shutter release. I checked schedules. A few days later the International Space Station attached to the Space Shuttle (bringing the whole thing to the size of two football fields-- and carrying 13 astronauts) would pass over Idaho again. The schedule was in military time and I read it wrong. As luck would have it I was an hour early. Then in my techno-challenged fumblings I popped the battery out of my remote control and it fell in the dark in the grass. Fortunately, I found the pieces and had everything ready when the star of the show made its appearance an hour later. It moved so FAST! I photographed a lot of stars and caught a shot or two with a smear in one corner. Even with the remote I had to lead the target and take my hands off the camera before I took the picture. Yet, I still got a leftover shudder. And it was gone. 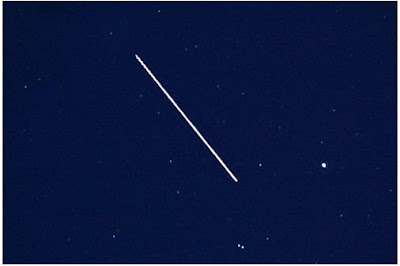 I took all my equipment in the house and reviewed my photos. One looked like this. During all this Hubby had relaxed in a lawn chair immune to mosquitoes and watched the show, trying hard not to laugh at the comedy on the lawn and wisely only commenting on the awesome display in the night sky. Sometimes I get way too caught up in capturing the moment and totally miss the big picture. The Space Shuttle Endeavor landed this morning at Kennedy Space Center. Reports say the seven astronauts who returned are safe and excited at the success of their mission. Japanese astronaut Koichi Wakata is back after four-and-a-half months in space. He says he can’t wait to eat some sushi and see his wife and son.
Posted by Leenie at 1:05 PM

Ok, I'm a geek, but I think these shots are absolutely awesome!! Even the wiggly ones that look like you're writing your name with a sparkler! I am so jealous!
Next stop - a 10 inch telescope and the rings of Saturn! Make friends with the astronomy teacher at the local college. I think they have a pretty good size telescope, and would be interested in your pictures.
Did you see the news recently about the amateur astronomer who was the first to notice that another comet had crashed into Jupiter?

All I could think from those first few pictures was... "Wow! Those astronauts are amazing pilots! How do they not get dizzy?

Impressive.
It looks like someone was writing in the sky and then finally got out the ruler.
I for one am glad you stuck with it.

Great shots! I love to see the vicariously as the mosquitoes are appalling in My Muskoka!

These are SO fascinating!
Loved them

Funny story! This sounds a lot like what would happen if I tried something so complicated. Steve would have it all figured out ahead of time, which is why I let him be the camera technophobe when such a thing is called for.
You managed to find the shuttle and track it, and that last photo is pretty dang good. I say, Bravo.

Love this post of course- astrohoof nerdville- also the shots of the moose- meese- are fabulous- so lucky to get that close without getting hoofed.
Mt. Vernon is a 30 minute drive from my house! What course are you taking? Where are you going to be taking the class?

Those shots you captured turned out great, very impressive. I have not had much luck taking photo's of the sky at night; just last night I tried. I wanted to capture the lit up yard, trees and sky from the incredible thunder and lightning storm that passed by in the wee hours of the morning. Unfortunately they didn't turn out.

I think all of the shots are amazing! Very cool, in fact!

I was another who was wondering whether it was the Earth's wobble or just bad driving by the astronauts! Awesome