If you are zooming along the seventy or so miles of Interstate Ninety that goes across the panhandle of the State of Idaho and you get stuck behind a large truck at about exit sixty-two you will never see Wallace. The freeway goes OVER the town. 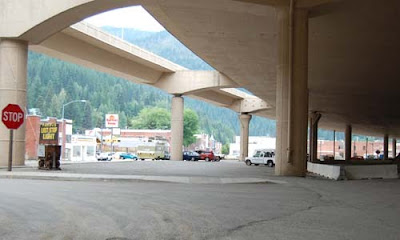 Wallace is in a deep mountain valley not far from Fourth of July Pass. This valley is about the only way through the Bitterroot Mountains. When plans were being made to turn I-90 into a huge four-lane corridor, Wallace was in the way. 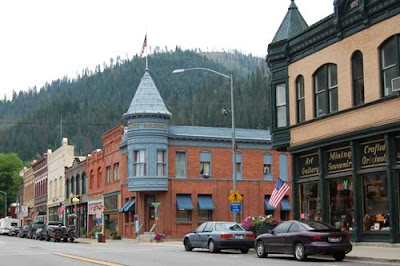 The town is listed in its entirety on the National Register of Historic Places. There was a problem. 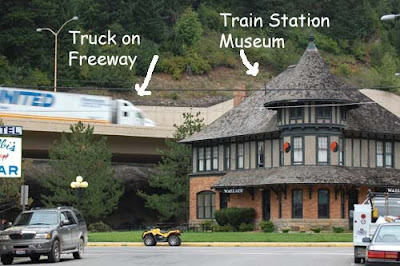 The decision was made in 1986 to move the chateau-style Northern Pacific Railroad Depot away from the mountain enough that a highway could be constructed on pillars over the collection of turn-of-the-century buildings. If you climb up on a stool at the local soda fountain and order a tasty huckleberry milkshake, 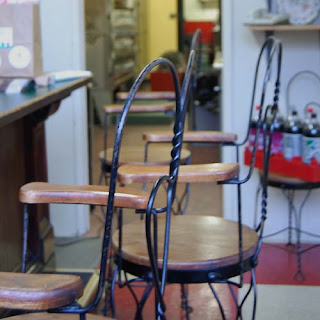 the lady behind the counter may tell you about the filming of “Dante’s Peak.” 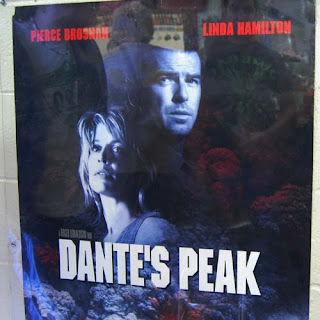 Wallace was chosen for the setting of the movie and, for one summer, Pierce Brosnan (James Bond) and Linda Hamilton (Sarah Conner in The Terminator) walked the streets of town. If you haven’t seen this cheesy film, it deals with a volcano that blows Wallace to smithereens. Never mind that the nearest volcanoes are Mt. St. Helens—hundreds of miles away in Oregon, Mount Rainer near Seattle and the whole basin of Yellowstone Park—far, far way in Montana (which, if you believe the rumors, is set to blow in 2012 and take out most of the western U.S.) Fortunately no buildings were harmed in the making of the movie or the freeway. 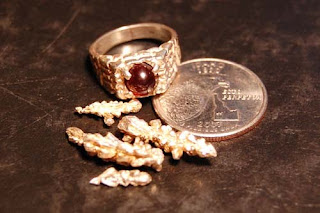 The 99% pure silver crystals I bought in Wallace, also my silver ring with a star garnet (Idaho's state gem), and an Idaho quarter ---NOT 99% pure silver.
Wallace is considered the Silver Capitol of the World— 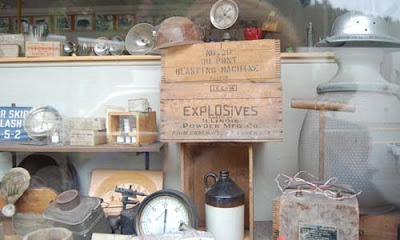 Items in store window displaying old mining tools.
source of more than one billion ounces of the shiny stuff since it was discovered there not long after the end of the Civil War.
On August 20, 1919 a great and historic forest fire swept across northern Idaho and western Montana. It was the largest forest fire in American history and blackened 3 million acres. For two terrifying days and nights the fire, driven by hurricane force winds, raged across the timberland and took 86 lives. The buildings on the south hill and the east part of Wallace were destroyed by the blaze. 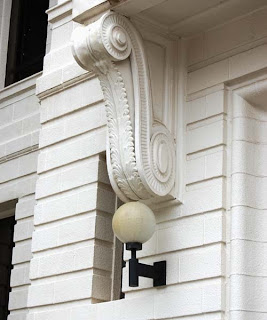 The rebuilt town now boasts buildings designed by nationally known architects of the early 1900’s with such features as cast-iron cornices and pilasters, terra cotta trim and decorative glass.
By the time I reached Wallace it was getting late. I had driven 430 miles (692 km) and was a little frazzled. 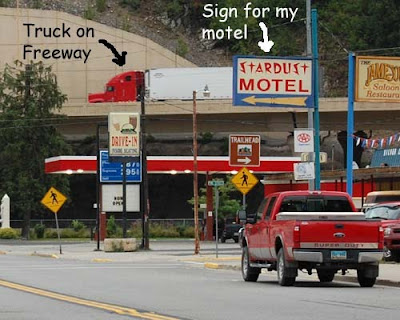 I got a room at the Stardust Motel, old and shabby, but clean and cheap. 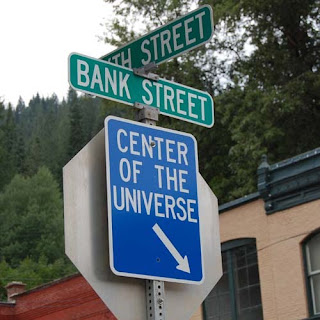 Just in case you wondered where it was… 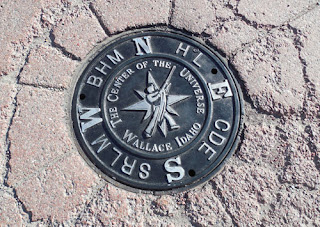 Neat!!! WIsh I could have gone with you. Nice to know where the center of the univers is I'll be sure to stand under that sign someday. :) I looks like a cute town. I hope your haveing fun. :)

Great post and photos. Hope that motel was well away from the freeway! Everything else looks so close to it! Nice momentos of the trip too, and well done with the driving.

Beautiful shots, Neener! You actually stayed at the Stardust - the coolest sign ever- Awesome! That is like eating at "MOM'S"...I drove from Rawlins to St. Geaorge in one go one time- Killer! Too many miles- I'll bet you were frazed! Great post- fabulous shots! Love your journey!

P.S. I hope the Stardust had a magic fingers bed...

This is so fascinating to me.
I lived in LA for a year but have never been inside this great country and long to see all the interesting places in the middle
Such a pity about the highway.........!!!
So glad you found Buster's blog
just a bit of fun really!
I do think a great deal of money is wasted on art when children make the coolest pictures......

What a fantastic looking town.
Thanks for including mileages.

Greaet post. I never heard of a freeway being built over an entire town. sounds like a fascinating place to visit.