It was probably something we ate at the buffet that caused the assault.  By the time the tour bus stopped for fuel at the little cantina a few miles out of Mexico City there was no doubt I had gastrointestinal problems. We went inside and I quickly found the door marked, “las mujeres.”  Inside was an attendant selling pieces of toilet paper for cinco centavos each.  I was prepared, however, with my own supply of wet wipes being warned ahead of time of bathroom tissue filled with wood chips or the total lack thereof. 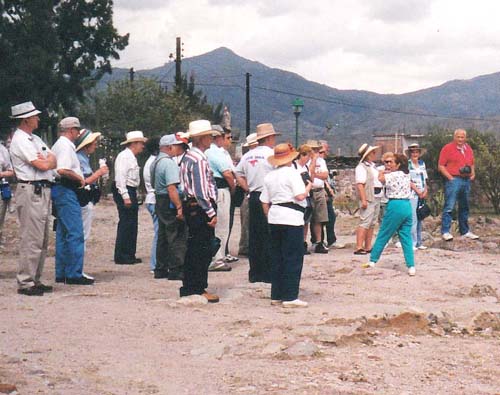 The following day our group was scheduled to visit ancient pyramids.  I was one of the first off the bus and somehow made it through the gauntlet of tourist junk vendors to find the restrooms located in a very modern visitors center.  I hurried in and was so grateful for porcelain fixtures with flush handles and real rolls of paper.  As I was exiting I nearly ran into a Mexican gentleman on the way in.  He appeared a little startled and took a second look at the words “los hombres” on the door.

Although I felt a little drained I was able to keep it together for the rest of the day.  I just had to remember the build up of pressure would not be gas but a surprise poopie. 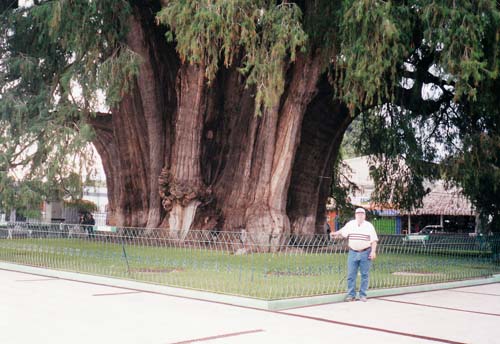 The last stop before our return to our hotel took us to more ruins and a visit to a tree called “El Tule.”  The tree was really tall and really, really old but I had other things on my mind.

One of the phrases I had memorized was, "¿Dónde están los servicios, por favor?" which came in very handy.  The lady at the sombrero stand took a look at my pained face and pointed past a wall and around a corner.

This time I made sure I went in the right one.  Anyway, the door to the men’s room was open and I could see ragged guys pulling fixtures and pipes out of the walls.  I hoped they were construction workers and not vandals and moved on.

The ladies bathroom had no door.  The stalls had no doors.  This was a challenge but I really was not in a shopping mood.  I took the first seat and was dismayed to hear a guy enter banging tools around.  I yelled, “occupado!” and heard him grunt and leave.  Sheesh!  There was no toilet paper or paper towels but I had my faithful packet of wet wipes.  When I walked out I discovered a guy who must have left his post as cashier for the servicios.  He hadn't been there when I hurried in but he saw me come out and informed me I had to pay two pesos to use the facilities.  I gave him four as a tip for the fine accommodations, shook my head and left.
Posted by Leenie at 5:17 PM

Sounds like a virtual tour would have been less distressing. I hope a better time was had by some of you.

Well I really enjoyed this trip it reminds me of the bad mussel I partake of in Victoria BC thank goodness for Canadian toilet paper and bathroom doors:) B

The horror! I ran into the restroom to vomit while waiting for somebody to recommend my imminent gallbladder removal at the ER. A guy came in while I was wiping my mouth. I told him I was sorry for not closing the door. He said, "Well, it IS the Men's Room.

Yikes....it's bad enough having these things happen at home but out in the wilds of where ever...whooeee.

Oh no! This is exactly what would happen to me. I just know it!! I'd have nightmares about it too.

OY! this did not sound like a pleasant experience!

I have dreams like this- bad dreams- frequently...What does it mean? Not sure but this experience of yours is so vivid and real- I am running for the wipes right now!!!

Oh poor you! You have described what must have been a nightmare in a very funny way though-at least you got a story out of it! Love the tree!

Traveling through Mexico, old or New, can be bad enough, so having to pay for your food three times seems outrageous.

"surprise poopie" LOLOL! What a nightmare! Very funny in hindsight... not so much when you're in the midst of poop hell! Kind of over-rides everything else.

Paying to poop... eeeh. I'd have to start pulling out a training potty if that were the case.

Only you could make such an entertaining story out of having a dose of the "trots"!!

Hope the surprise poopies didn't last too long. Wow that is some tree:)

Oh, that and Urinary Tract Infection. The traveller's worst nightmare. Well done you for managing to get through such an uncomfortable experience.
That tree is amazing!

The picture of that tree was incredible. WOW.

Hope your tummy is feeling better!

Yikes! I hope you are feeling better, Leenie! It's funny, but my own bathroom is something I always miss when I'm away :)

Oh Leenie! How awful! Did you finally get some imodium in you?!

How is it that you write about something so awful and yet manage to make me laugh out loud? I apologise. It's not through lack of sympathy and I really hope that you feel better now and that the rest of your journey is less 'challenging'! Wet wipes - on the list of best inventions for travel ever.

This experience happened several years ago. It's much easier to laugh at such things after much time, Pepto, and Imodium.

So what did you think of Emily?

Goodness. I hope things got better. That was horrible.