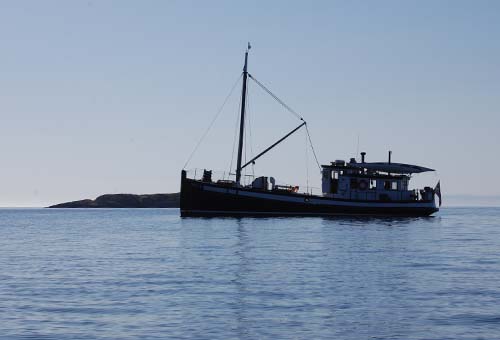 We learned about the David B. Through the internet. http://northwestnavigation.com/

The wooden boat was built in 1929 and spent her early years working in the fish industry in . She passed through several hands and ended up rotting behind a breakwater on .

In 2006 Jeffrey and Christine Smith bought her. Their plan was to own and operate a small expedition boat that would tour between and the Puget Sound of Washington State. 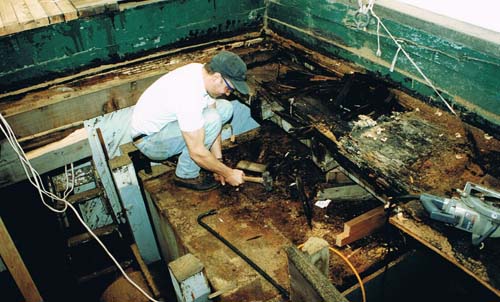 It took them eight years of hard labor to restore her and make their maiden voyage to .  The story is told in Christine’s award winning book, “More Faster Backwards,” http://morefasterbackwards.com/ 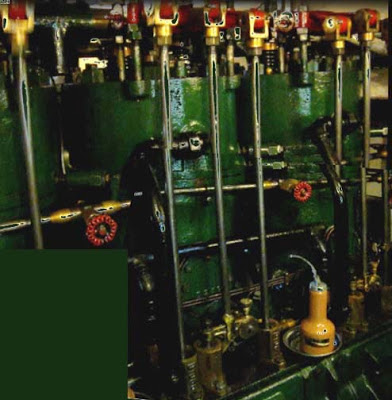 The David D is powered by a huge antique three cylinder diesel engine that kicks in with a BANG and shoots smoke rings out of its stack until it warms up. 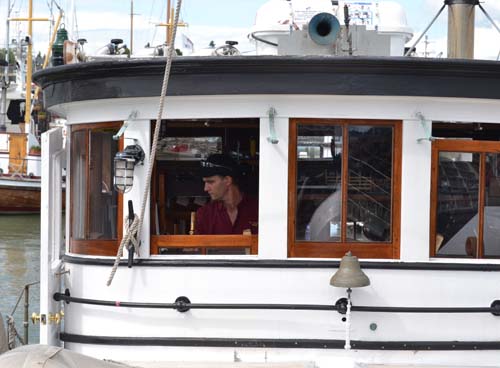 Right after the engine starts, Captain Jeffrey engages the gears of the windlass to haul up the huge anchor. 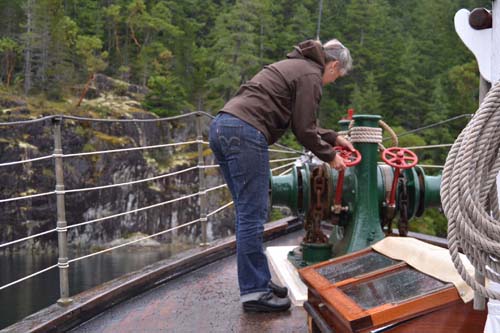 The whole place rattles as Christine monitors the big, big chain as it is cranked up out of the water.

Under way, the sound of the engine is not unlike that of a fetal heart monitor and is known to mellow out passengers and put them into a comatose siesta. Of course a deck chair in the sun and a tummy full of Christine’s cooking can intensify the effect. 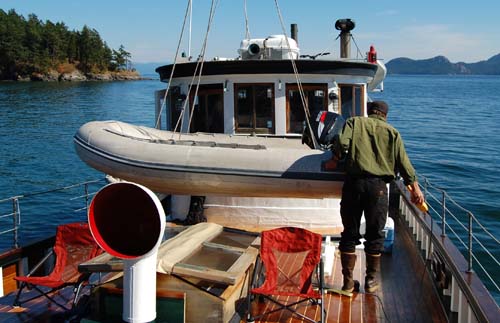 The spic and span boat with its shining paint and varnished decks travels at a steady speed of around seven mph.  The deep hull gives an even, stable ride which cuts way back on motion sickness and makes photography a delight.

We rejoined the Smiths with two other passengers for our second trip, a nine day tour of Desolation Sound, in June.  The experience was beyond fun.

A two minute video of the inside and the deck of the David B while underway.
p.s. The one time I was on deck ready with my video camera to capture the action of the anchor going down,  a big bald eagle with his fish dinner upstaged the whole process. More on that in part 8.

Labels: David B, Inside Passage 2013, travel

I'm guessing this is not your last trip on trip boat.

Thank you for the video! Gorgeous little boat with a lovely heart beat- Next- ALASKA!!!

Oh it sounds like such a wonderful trip. The boat is darling, well if a boat can be darling. And the scenery...sigh.

The sound of the engine almost made me nod off during the video.

I tried to email you at black.eileen@yahoo.com. It came back undeliverable. Is there a better address? Contact me at fishducky@budandfran.com, please.

So cool, Leenie. And inspirational, too. I do suffer from seasickness...but what a trip that would be! And to see something not only restored to former glory, but to still be doing what it was created for is magnificent.

I would have taken one look at that wood rot and decided that wasn't the boat for me. I guess that's why they own it and not me. :) Looking forward to more of your trip.

I am so enjoying this trip. Makes me think this is a much better way to go than a huge cruise full of sick people.

This looks like the perfect holiday. Boats are lovely and relaxing, and with someone else doing all the sailing and cooking what more could you ask for?! Glad it was a good holiday.