Prompt:  Write a poem in which you find a map that leads to treasure.  To find what your “treasure” is, pick up the nearest book, go to page 22, and point to the first concrete noun you see.  That noun is what you discover in the poem.  Extra credit:  Make references to books, movies, or characters that deal with treasure hunting:  Tom Sawyer, Huck Finn, Indiana Jones, Lara Croft, Pirates of the Caribbean, etc. 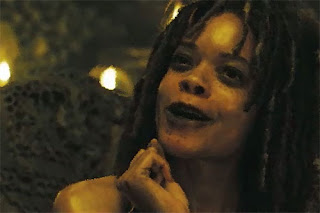 The Obeah women looked out of her lair.
She hissed and growled and rolled her eyes.
Her teeth were nasty and so was her hair.
“You wan’ de treasure? You pay de cruel price.”

She provided a map all covered with stains
With an ominous X marked there in red.
It wasn’t far from the Kraken’s domain
Near the graveyard of ships and the dead man’s head.

We followed the trail through a jungle of snakes.
We tiptoed passed the cannibal’s home.
We floated a raft ‘cross a fiery lake,
And wandered our way through the catacombs.

At last we arrived on the sandy plot.
We found it there on a gritty dune.
“Aha!” The treasure for which we sought!
Christopher Robin’s Blue Balloon.

You're a good poet, Eileen!!